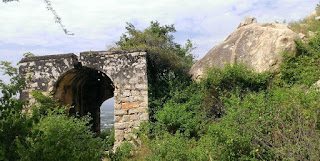 This hill fort was built by joining two mountains by Recharla Padma Nayakulu and Gona Ganapa reddy in 13th century. This fort has witnessed many wars between Bahamanis, Vijayanagara Kings, Bijapur Kings and Qutb Shahi Kings etc. The cannons which still exist have been kept on the top most side of the fort. We can also see palace and ministers houses ruins.

The name of Ghanapuram Khilla came into existence from the name of Kakatiya Ruler Sri Ganapathi Deva. The village was Naginenipally before it is named after Kakatiya Ruler Ganapathideva by Gona Ganna Reddy. People believe that there are two secret tunnels inside of the fort. One is connected with the village at the bottom of the mountain and the other one is connected to the Panagal fort. After Buddapuram war, Kakatiya's last king Pratapa Rudra married to Gona Ganna Reddy's daughter in this Fort.

The fort has beautiful rockscapes and greenery with 2 ponds which were used as drinking water supply for the fort army. There are many adventure activities that can be done here including rappelling, rock climbing, caving etc.