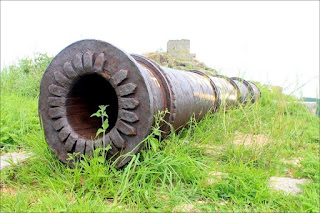 Pangal Fort is located at Pangal in Wanaparthy District of Telangana, India.

Pangal Fort is one of the Famous Hill Forts in Telangana. It was built by Kalyani Chalukya Kings during 11th and 12th Centuries. The fort is spread across hundreds of acres with Seven Gateways. The Main entrance is called as Mundlagavini and is a special attraction of this fort. It was built with huge granite rocks.

The ruins of the fort houses several monuments built with beautiful architecture, including Uyyala Mandapam and several water bodies. Many deadly wars had taken place among the dynasties like Bahamani, Vijayanagara, Padmanayaka and Qutub Shahis at this fort. The fort also witnessed guerrilla warfare during the revolted against the Nizam.

The specialty of the fort is its area ad terrain. Spread across hundreds of acres of land in rugged hilly terrain with thorny vegetation, the fort area is guarded by seven gateways. There are some small ponds, rock structures and beautiful rock formations. This abandoned fort is now neglected and filled with beautiful green foliage through out. The fort was controlled by the Kalyani Chalukya, Bahmani, Padmanayaka, Reddiraajulu, Qutb Shahis and many local warlords. Due to the invention of the cannon, simple hill forts have become useless to host large armies and therefore abandoned. The forts was impregnable in guerrilla warfare where small rebel groups revolted against the Nizams.

Pangal can be reached from Wanaparthy which is 15 km away. The trekking starts from Pangal village and it is an easy trek which takes about 2 hours to reach the peak, explore and come back to the village.