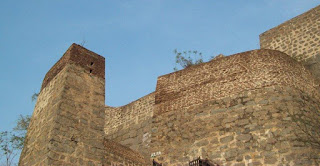 Khammam Fort is located in the city of Khammam, Telangana, India.

The fort is believed to have been built by the Kakatiya rulers in 950 AD. It served as an impregnable citadel during various regimes of different dynasties, including the Kakatiyas, Qutb Shahi’s and Asaf Jahis.

The fort was situated in a very vast area in the heart of the City of Khammam. It was notified as a protected monument by the Archaeology Department several decades ago.Despite decades of neglect, the historical edifice, which once flourished with regal opulence, presents its alluring charm due to its architectural splendor.

The funds to build this Fort complex were procured by three army men Lakshma Reddy, Ranga Reddy and Velama Reddy of the Kakatiya dynasty.

It is believed that gold coins used in construction of this fort were unearthed from their farm near Khammam and Upon receiving the news from these men, the then Kakatiya king ordered them to build a Fort on the Hill in Khammam which is known as the second capital of the kakatiya dynasty. In order to have a secured second capital due to the repeated attacks from the enemy kingdoms on the capital city Orugallu (Present day Warangal).

Lakshma reddy, Ranga reddy and Vema reddy started construction of the fort on the Hilltop located in the heart of the city. A 100-acre massive lake was constructed during this period to satisfy the drinking water needs of the city called the Lakaram lake, named after its Builder Lakshma Reddy.

In the year 997 A.D, when the Gajapati kings arrived in Khammam, the construction was continued under the leadership of Akki Reddy and Aska reddy of Kondapur Taluk.

This fort was under the Kakatiya reddy kings for a very long period of 300 years. Due to the rift between the Army generals of Kakatiya kings of that time, This fort went into the hands of the Padmanayaka dynasty(velama kings) for a brief period and then ruled by different independent rulers such as the Nandavani, Kalluru, Gudluru kings.

Sultan Quli Qutb Mulk the founder of the Qutb Shahi dynasty, which ruled the Sultanate of Golconda in southern India from 1518 to 1687 occupied this city and the fort in the year 1531 A.D after defeating the Shitab Khan, the independent ruler of the jagir of Khammam. The fort remained under the Qutb shahis until 17th century and then passed it over to the hands of Asaf jahi dynasty.

Although Khammam fort was majorly under the Kakatiya dynasty, it slowly became an independent territory within the kingdom.

After the decline of the Kakatiya dynasty, 74 Telugu speaking feudatories of the region under the leadership of Musuluri fought for 10 long years to unify the Telugu land and they did not succeed.

Shitab khan, the army commander of the Humayin shah of the Bahmani sultanate declared Khammam as his jagir(a land fief) along with Rachakonda and Warangal in the year 1503 and ruled this fort city without getting into any troubles with the then rulers between 1503 A.D to 1512 A.D. He maintained good relations with the Qutb shahi. During this time Khammam became major city of the region and Shitab khan rose to high stature in the eyes of other rulers and this fort city was declared the regional administration capital of the kingdom.

In the turbulent regional politics of the time, Quli Qutb Shah ruler of Golconda Fort (in modern Hyderabad) was asserting his dominance and Shitab Khan had to face invasions from Golconda which was just shaking off the suzerainty of the Bahmanis.[5] Warangal succumbed to the Golconda ruler and Shitab Khan had to flee, about 1512. He joined the service of Prataparudra Gajapati, King of Kalinga (Orissa). When the legendary Vijayanagara Emperor Sri Krishnadevaraya went on his Kalinga campaign, 1516–1517, his triumphal progress was effectively hindered by the archers of Shitab Khan at the mountain pass near Simhadri(modern Visakhapatnam district). But Shitab lost the battle and, very likely, his life there.[6]

Khammam fort fell into the hands of the Emperor Sri Krishnadevaraya during 1515 A.D. According to Nandi Thimmana (15th and 16th centuries CE),a Telugu poet and one of the Astadiggajas in the court of the king Sri Krishnadevaraya, described this historical incident in his notable work called 'Parijathaapaharanam'


Meaning, The Emperor Sri Krishnadevaraya invaded the City or the Fort of Khammam.

Zafar-ud-doula was appointed as the Tahasildar in between the years 1761 to 1803,under whose rule this fort has been renovated and all the new constructions including the roads took place.

In the year 1768, Zafar-ud-doula – II was appointed as the Tahasildar. He is also the younger brother of the former. The urban settlement of Dhamsalapuram was named after Zafar-ud-doula-I (also known as Dhamsa).

This Fort is located in an area of 4 Sq. miles in the heart of the City of Khammam on top of a massive granite Hill.It is surrounded by a huge rock wall averaging between 40 and 80 feet(13 to 25 Meters) in height and 15 to 20 feet(4.5 to 6 Meters) in width.

There are steps from each buruju (bastion) to enter into the fort.The Fort was considered practically impregnable by invading armies.

A number of balconies and windows are constructed along the wall in order to use the artillery during wartime. It has a capacity of mounting at least 60 cannons at a time.

The fort 10 large gates most of them in poor shape now. Each gate has cannons mounted on them along with a water pot made of rocks. They are built such that an impact of a cannonball could not break it.

The main entrance is a 30 foot tall entrance known as the Khilla darwaza(meaning fort gate in Urdu).It has 2 cannons on either side of the entrance. One of them still mounted with a head. They are now partially destroyed due to the negligence of the archeology department.

The east gate or the secondary entrance is equally large and is popularly known as the Raathi Darwaza(meaning stone entrance in Urdu) or Potha Darwaza.

All other gates are smaller than the main entrance and could have been constructed to avoid large cavalries to enter the fort in case of an attack.

A huge rainwater catchment system and well have been constructed on the Khilla during the period of Zafar-ud-doula, well known for construction of tanks during Qutb shahi dynasty. This massive tank is now known as the ‘Zafar well’. It is 60 feet X 30 feet stepped well with a bridge across it for men and horses to move around. He also built the walls using Bricks and limestone along the fort.

As soon as we enter the Khilla darwaza, one can see the Fort at a distance of 300 feet. There are small steps carved out of this hill to reach the top of the Hill fort. They are later renovated with railings for the steps by the Tourism department and Archaeological Survey of India in 2005 during the 1000 year celebrations of this historical fort. A lot of small gates known as ‘Dalohiswar’ are all around the walls of the fort.

Fort has at least 15 bastions constructed with two massive walls as a military strategy to take the impact of the cannonballs and to counter the enemy from the top. A 15 foot deep trench is dug in some places for the army to store and use as a hiding place.

The huge blocks of stone used for the walls are as long as 10 feet and are believed to be transported using elephants and men. No mud or limestone is used in this huge wall and the rocks are tightly placed and leaving the viewers amazed by the construction

A permanent Gallows has been erected on this prominent hill fort, where the estimated seat of justice could have been inside the fort.The platform is made of Stone and appears like a well,due to which the locals call this 'Nethi bhavi' ('నేతి బావి 'meaning Ghee well).This stone structure could be seen from allover the city of khammam.

Stone Gallows, locally believed to be a Ghee well on top of the fort
The fort is believed to have a secret tunnels to the Warangal Fort with multiple entrances in different locations at the fort. One such entrance is 10 feet in diameter and the steps to enter the tunnel are closed due to damage over the years. The local folklore includes stories about valuables being transferred between the kings from here using the secret passages and escaping enemy attacks through them.