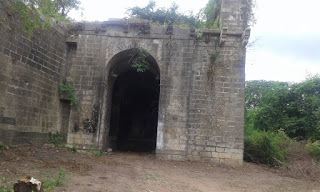 Utnoor Gond Fort was constructed around 1309 AD and is spread on a 15-acre area consisting even of a step well modelled on the lines of the famous step wells of Rajasthan.

The fort has seen centuries of neglect. The main entrance, completely crumbled, is located on the east and leads to an inner gate, a major portion of which stands even today. While the ramparts were built of brick and mortar, the inner walls were made of mud and the inner gate was constructed with stone.


The inner gate is a tall arched structure which leads to the living quarters and the garrison inside the minor fort. Earlier, there was a staircase by the side of the inner gate which led to an elevated platform from where the king held a darbar or court.

There is a beautiful well with steps to the left of the inner gate which is in a comparatively better stage of preservation.

The well, apparently used by women in the family has changing rooms at different levels.

“Though the style of arches looks like Persian, there are subtle changes which show that Gonds had an architectural style of their own. The huge and high base of the arches is an example,” pointed out Kala Ratna awardee Guruji Ravinder Sharma, himself an artist and architect who founded Adilabad’s Kala Ashram.

The Gond Kings who ruled for 230 years with Utnoor as the centre in Asifabad district were known for their concern for the welfare of farmers. They were better known for taking welfare measures than the Kakitiya kings. The Gond Kings created the Golusukattu stream to enable ryots get over their irrigation problems. Now the historic Gond Fort has reached dilapidated stage. Gond tribals want the government to look into the status of the fort, which symbolised the kings’ affinity for history and ar, and also the armory and canons stored there.

Fort should be converted into a museum, say king’s descendent Tank built by Utnoor King Hanmanth Rao for his queens to bathe still intact. The tribal kings had taken up many welfare measures

The fort should be converted into a museum, demands the king’s descendent Sudhakar. He told the Hans India that the government has failed to save the structure from collapsing, while stressing that the fort was in no way inferior to that built by the Kakatiya kings. GIrijan leader Atram Bhujanga Rao while pointing out to THI that the tribal kings had taken up many welfare measures stressed the need for the government to include these steps in the school curriculum.

King Hanmanth Rao who ruled Utnoor as the capital was a feudatory to the Ballarsha King. In the year 1700 he got Ballarsha separated and announced independence and built the Gond Fort spread over 15 acres. Rao tried to usurp parts of Gondwana Kingdom and in the process occupied Narmool, Kawwal, Sirpur and extended his domination up to Chandrapur.
He defeated the Nirmal Kings in a war and collected tax from them. Even while expanding his kingdom, the Utnoor King built forts, mainly providing for armoury and stores to keep grains and money, besides building a tank for his queens to bathe, including special rooms for change of clothing. This tank, which is still intact, also supplied drinking water to the Old Utnoor area. He also mobilised a large army.

When drought struck the kingdom, Rao provided free supply of jowar to farmers and got 14 tanks dug. Of them, the Yellamma Cheruvu and Saraswathi Cheruvu still have water. These water bodies paved the way for the kingdom to overcome dry spell and brought credit to him as a good ruler, as documented in history. He was not only known for building forts, but also the Siva temple in Old Utnoor, which has Gondwana inscriptions, that resemble the elephant and lion figures seen in Maharashtra, Chattisgarh and Madhya Pradesh.

Rao had two heirs Girijarani and Jalapathi Rao. As he became old, the King got Girijarani crowned. She became the first Gond queen in history. She fought wars with the Nirmal kings, as historic evidence shows, Sudhakar told THI. Later, Jalapathi Rao assumed power. He agreed to buy peace with the Nizam by agreeing to pay tax, following which the ruler gave him the title of Shah.

Rao used to collect tax in the Nirmal area and send the amounts to the Nizam. After several years Rajadev Shah occupied the throne and went on to become MLA of Utnoor twice after independence. He distributed three acres each to poor farmers and gave his ancestral property to girijans. The present ITDA office land was given free of cost by him.