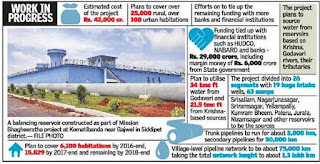 Costing an estimated Rs.35,000 crore, the project envisages laying 1.26 lakh km of pipeline network that will reach 25,000 rural and 67 urban households across Telangana.
But that is contingent upon Godavari and Krishna rivers supplying water to the project. As part of the project, while Godavari river will supply 34 tmcft, Krishna river will feed 21.5 tmcft to the water grid.
Telangana government’s ambitious initiative to provide piped water supply to every household Mission Bhagiratha  is Telangana Chief Minster K. Chandrashekar Rao’s dream project.
A drinking water project of this scale has never been attempted before in this country and Rao has vowed not to seek votes in the next election if the project isn’t completed by 2019.
Telangana’s plans to get internet to 36 mn people
Along with the Mission Bhagiratha water pipelines, Internet cables are also laid to provide Internet to each and every household.
Swach Bharath official hails Mission Bhagiratha as best in the world
Drinking Water Supply and Swach Bharath Mission Secretary Parameswaran Iyer, who met him at Pragathi Bhavan here on Thursday. Parameswaran Iyer has expressed happiness that Mission Bhagiratha Drinking Water Scheme is one of its kind in the country, which was going to supply drinking water to the households and it will become a role model in the Country. He said Prime Minister Narendra Modi, after inaugurating Mission Bhagiratha in Gajwel, had told them that this program is one of the best in the country.
Maharashtra to replicate Mission Bhagiratha
The project, which was initially called the Telangana Drinking Water Supply Project, was renamed by chief minister K. Chandrashekar Rao, a deeply religious man, after Bhagiratha, a mythical king who is credited with bringing River Ganga from the heavens to the earth, in December 2015.
The chief minister’s interest in the water grid project is not without some history. In 1996-97, when Rao was still a legislator of the Telugu Desam Party or TDP (he floated Telangana Rashtra Samiti in 2001), he implemented a similar project, albeit on a smaller scale.
At a cost of Rs.60 crore, the Siddipet drinking water project supplied water to households in 180 villages, a part of Rao’s Siddipet constituency. It involved collecting water from Lower Manair Dam and supplying to households. The project is still operational.
The new Telangana Water Grid will depend on water resources from Srisailam, Sriram Sagar Project, Komuram Bheem Project, Paleru Reservoir, Jurala Dam and Nizam Sagar Project, the major hydro projects in the state.
The state-level grid will have 26 internal grids. The main trunk pipelines, running a length of about 5,000km, will supply water to secondary pipelines, stretching over 50,000km. The secondary pipelines will carry water to tanks in habitations from where a village-level pipeline network extending 75,000km will supply water to households in the state.
The state government is engaging Mumbai-based firm Genesys International Corp. Ltd to map the water grid project using geographical information systems and LIDAR technology. LIDAR is a surveying technology, on the lines of a radar, to build high-resolution maps using laser beams. Genesys had earlier deployed its technology to map parts of Mumbai and Uttar Pradesh, and Lavasa City near Pune.

Water is life! International community has declared clean drinking water as a human right long back. Yet, lack of drinking water is a common sight in our state and country.

Even though two perennial rivers flow across the state, the tragedy is, most of Telangana state does not have access to clean drinking water.

To change this situation, the Telangana government, under the able leadership of CM Sri K Chandrashekar Rao, has designed the Telangana Water Grid - a mammoth project intended to provide a sustainable and permanent solution to the drinking water woes.
The Telangana Water Grid would depend on water resources available in Krishna & Godavari - two perennial rivers flowing through the state. A total of 34 TMC of water from Godavari river and 21.5 TMC from Krishna river would be utilized for the water grid. Plans are ready to use water from Srisailam, Sriram Sagar Project, Komuram Bheem Project, Paleru Reservoir, Jurala Dam, Nizam Sagar Project. This scientifically designed project intends to use the natural gradient wherever possible and pump water where necessary and supply water through pipelines.