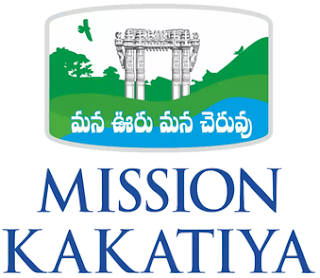 The Mission Kakatiya programme is all set to go national. Niti Aayog, the central body that replaced the Planning Commission, is expected to push for the adoption of the Telangana government's programme of rejuvenating small and medium irrigation and village tanks in other states.

A silent transformation is taking place across rural Telangana as the country’s newest state has emerged as a role model in rejuvenating minor irrigation tank system, a lifeline for small and marginal farmers.
“Mission Kakatiya”, a flagship programme of the Telangana Rashtra Samithi (TRS) government to restore centuries-old village tanks through people’s participation, has earned appreciation from the Union Water Resources Ministry for setting an example in reviving the defunct chain of tanks.

Mission Kakatiya with tagline Mana Ooru Mana Cheruvu is a program of restoring all the tanks and lakes in Telangana State, India. The project aims at restoring over 46,500 tanks across the state at a cost of Rs 20,000 crore over five years to create a storage capacity of 255 TMC of water.

The name 'Mission Kakatiya' is given in the remembrance and tribute to the Kakatiya rulers who developed large number of the irrigation tanks.

The Program was inaugurated on 12 March 2015 by chief minister Kalvakuntla Chandrashekar Rao.

Defunct for decades, several tanks are now brimming with water, bringing smiles on the faces of farmers as the project is expected to boost agricultural production by at least 30 per cent, increase groundwater recharge and drinking water availability and improve the soil quality.
A visit to a few tanks under restoration in Adilabad, a backward and tribal-dominated district bordering Maharashtra, revealed a discernible change and a new sense of optimism among farmers with tanks in their villages brimming with water, enough to irrigate their crops. “Farmers growing paddy and turmeric here are now assured of water availability for the entire crop season of 120 days,” said Shivaiah, sarpanch of Parimandal village.
“People are actively taking part in the programme as they see benefit in the area of irrigation, improved groundwater recharge and drinking water facility. Besides, the silt, removed from the tanks, has high nutrient value and its usage will help farmers save on fertilisers and pesticides,” Sridhar Rao Deshpande, Officer on Special Duty to the Irrigation Ministry, told The Tribune.
Under the first phase, completed in April, over 8,000 tanks have been restored at a cost of Rs 1,600 crore. Another 9,000 tanks were taken up under the second phase during the current financial year.
The project involves desilting the tanks, repairing the bunds, clearing catchment area and feeder channels of encroachments, repairing damaged sluices and surplus structures and laying canals up to the fields. Many of these tanks were built during the Kakatiya dynasty, over 800 years ago. A chain of interconnected rain-fed tanks, whose flow depended on gravity, were developed and canals were built from these lakes to supply water to the fields. However, they have become defunct over time.
The experts say that over the years, yields have come down drastically in the upland Telangana because of decreasing reliance on tank irrigation and rampant exploitation of groundwater resources. The National Bank for Agriculture and Rural Development (Nabard) has released Rs 1,000 crore for the programme and has shown its willingness to provide another Rs 1,000 crore.
Prime Minister Narendra Modi made a specific mention of the project during his recent visit to the state. “We have also approached NITI Aayog for Rs 5,000 crore assistance,” the irrigation official said. “In the combined state of Andhra Pradesh, the successive governments had completely neglected minor irrigation sector in Telangana. We are now correcting the situation through people’s involvement. This mission will go down in the history as the biggest project of its kind ever undertaken in the country,” state Irrigation Minister T Harish Rao said.
Initially, people were sceptical in view of their past experience but after seeing the results, their aspirations have gone up and there is enthusiasm all around,” Adilabad district Collector M Jagan Mohan said.

Even the groundwater table has shown a marginal rise with the spruced up tanks and lakes receiving considerably good inflows.

"It is just a humble start and there is still a long way to go. While the agriculture scenario is certainly a cause of concern with south-west monsoon offering a mixed bag of a dry spell and patches of good rains, it is a motivating message from Mission Kakatiya," said minor irrigation chief engineer Bhupathiraju Nagendra Rao.
Tanks have been the life line of Telangana owing to the state's geographical positioning. The people of the state are highly dependent on the tanks which are spread across all the 10 districts. The topography and rainfall pattern in Telangana have made tank irrigation an ideal type of irrigation by storing and regulating water flow for agricultural use.

Construction of tanks in Telangana has been an age old activity since pre Satavahana era. During the Kakatiya era, the construction of tanks was carried out with utmost technical expertise. Tanks such as Ramappa, Pakhala, Laknavaram, Ghanapuram, Bayyaram which were built by Kakatiyas resemble seas and they greatly helped agriculture and overall development and prosperity of the Kakatiya kingdom.

This vision and legacy of Kakatiyas were carried forward by Qutubshahis and Asafjahis who ruled this region for centuries. Hundreds of big and small tanks were built in Telangana region during their rule. Government desires to uphold the vision of Kakatiyas which envisages revival and restoration of Minor Irrigation Sources in Telangana State.