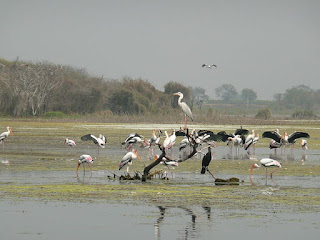 The charming part about this sanctuary is that one can take an adventurous boat ride for Bird watching in the Manjira Wildlife & Bird Sanctuary.

Originally a crocodile sanctuary, today more than 70 species of birds are spotted here and is home for the vulnerable species mugger crocodile.

This man-made reservoir provides drinking water to Hyderabad and Secunderabad.

Nestling between the Manjeera and Singoor barrages, it is home to many bird species and reptiles. Some of the high grounds in the lake don't get submerged even when the lake is full. Due to its relative inaccessibility and limited human interference, this lake attracts large colonies of birds.

The environmental education centre that has a museum, library and an auditorium, helps educate visitors about Nature conservation and the need to maintain ecological balance. Bird lovers can travel by the boats operated in the area to watch their winged friends. Binoculars and books that help identify birds are also available.

A crocodile breeding pond has been set up adjacent to this. Area About 20 sq km

Dry Savannah type of vegetation is found in the sanctuary.The reservoir supports both submergent and emergenttypes of vegetation. The plant species of Typha, Ipomoea and Acacia cover the periphery of the waterline, while agricultural fields surround the reservoir and the river.[1]

Average rainfall of the region is 915 mm.

At the banks of the river a village named Kalabgur in which located a temple , historically said to be constructed in Medieval times .The holy temple has magnificent architecture and entirely made of stone.The temple has standing pillars looks like carved out of single stone.The temple deity lord Kashi vishweswara .The temple also has other gods such as lord Krishna,lord Ganapathy and goddess Saraswathi.

Flora
The sanctuary is a freshwater ecosystem. The plant species of Typha, Ipomoea and Acacia cover the periphery of the waterline, while agricultural fields surround the reservoir and the river. Some of the major plant species found are Ipomea, Babool, Prosopis, Vallisneria, Eichhornia, Reeds.[1][2]

Fauna
The sanctuary is a riverine habitat supporting mugger crocodile and fresh water turtles. The sanctuary is home to prawns, molluscs, and fishes like catla, rohu, murrel, eel, karugu and chidwa . Among reptiles, monitor lizard, mugger crocodile, turtles and cobra are present. The Indian hare, wild boar, mongoose and jackal are also present.

Avifauna
Around 73 species of birds are present in the sanctuary. A large flock of common teal and cotton pygmy goose is found. Sometimes more than 1,500 ruddy shelduck are seen. Upstream of the Manjeera lake, a large number of cranes and barheaded geese. Fourteen species of birds breed in the sanctuary, some of them are: Darter, Asian openbill, painted stork, Eurasian coot and black-crowned night heron.

In recent time the vulnerable species lesser adjutant and Indian skimmer have been spotted at the sanctuary. The near-threatened species darter, painted stork, Oriental white ibis are also present in the sanctuary.

Some of the other birds found in the sanctuary are : little egret, cormorant, pochard, spoonbill, brahminy duck, pintail, kite, partridge, quail, peacock and Asian open bill.

In the mid-1980s, Manjira became a popular destination for bird watchers and an annual waterbird count was initiated. This led its conversion into a wildlife sanctuary. Today there are about 400 to 600 crocodiles in the sanctuary.Its a watchable tourist destination. A crocodile breeding program is also carried out here.

The sanctuary has an Environmental Education Centre which consists of a museum, a library, and an auditorium. Films about birds and animals are shown daily. Boats are in operation to take the visitors around the sanctuary for bird watching.Binoculars and books on identification of birds are available to visitors.The museum has exhibits which depict the detail biodiversity of the manjeera wetlands.

The best season to visit the sanctuary is from November to March when major migrant birds nest and breed here.

Accommodation for visitors is available in inspection bungalows at Sangareddy, Singur and Sadasivapet.