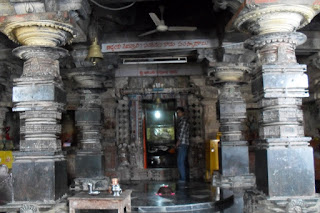 The history of the temple dates back to the era of the Kakatiya rulers from 11th century A.D.

The temple complex is also home to two other temples, they are Sri Anantha Padmanabha Swamy temple & Sri Venugopala Swamy temple. Hence it is also called as Trikootaalayamu.

According to legend, this temple was built on water stream coming from holy Kasi. It is said that in case if you drop a coin in garbhaalayam of Sri Venugopala Swamy temple, then you can hear a sound similar to that of a coin being dropped in water. Sri Anantha Padmanabha Swamy temple is located towards the west side of garbhaalaya.

The beautiful temples are adorned by regular pujas & abhishekam every day.

Thanks to the Bathukamma festival, an 11th century village – Kalabgoor – located a few kilometres away from the district headquarters got a place for promotion under rural tourism

It is only four Kms from old Bus Station of Sangareddy and is located at a distance of 60 Km from Hyderabad and 71 kms from Medak.