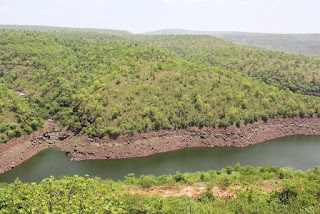 Nallamala Hills located in Telangana and Andhra Pradesh is one of the most soothing hill stations,wrapped in an amazing beauty, shimmering gushing water, deep valleys and thick forests enchants the visitor’s mind and soul.

Pennar and Krishna are two big rivers in this region and Nallamala hills are located between these two rivers. The two big peaks of this hill range are Bhairani at 1100 meters distance from the sea level and Gundla Brahmeswara at 1048 meters level.

For most tourists taking the road to Srisailam, the view of the imposing dam with river Krishna’s waters gushing out of its gates and a darshan of Lord Mallikarjuna Swamy is not enough without a glimpse of dense Nallamala forest in Farahabad.


Nagarjunsagar-Srisailam Tiger Reserve, which is spread over Nalgonda and Nagarkurnool is the largest Tiger reserve in the country. This Tiger Reserve covers a total area of about 3,568 square kms. Srisailam’s temples and reservoirs are the major attraction for thousands of tourists and pilgrims visiting the holy town.

The Nagarjunsagar-Srisailam Tiger Sanctuary was declared officially in the year 1978 and has been recognized by the Project Tiger in the year 1983. This Reserve has been renamed as the Rajiv Gandhi Wildlife Sanctuary in the year 1992. The reserve is known for its breath taking scenic beauty. Situated in the deciduous Nallamala forests, the mystifying landscape of the lofty hills and echoing valleys, exciting winding roads, perennial rivers, is this most charismatic world of the wild cats. It is a true wild paradise. The mighty River Krishna which rising in Sahyadri Hills and makes its way through Maharashtra and Karnataka flows across Nallamala tiger reserve. The best time to visit the Nagarjunsagar-Srisailam Tiger Reserve between the months of October to June.The best part of the 250-km drive to and fro Srisailam is that about 70-km stretch goes through the Nagarjunasagar-Srisailam Tiger Reserve, which is the biggest in terms of area, and about 80 km through the dense forest and Nallamala Hills.

One can see waterfalls and several species of wildlife. For the discerning urbanite, everything appears different, far from the madding crowds and concrete jungle.

About 2,500 light vehicles pass through the Mannanur check-post in the weekends while on weekdays it’s around 1,000 vehicles, whose owners pay a token of Rs. 10 towards the Environment Conservation Fund. Away from the main road, Farahabad Tiger View Point from the entrance is about 8 km. The fact that it takes about 50 minutes to reach the View Point shows how dense the forest is.

Finally, when the tourists reach the spot, the view is simply breath taking. The forest cover is so thick that one cannot see the land beneath, a few 100 metres below the sheer drop. The wildlife that tourists can easily see are spotted deer, ‘Sambar’, ‘Neelghai’, ‘Chousinga’, ‘Chinkara’, antelopes, monkeys, ‘Langurs’, porcupines, rattles and water dogs, apart from reptiles and bears that make an occasional appearance. All through the drive, the noise of engines recedes into the background, overtaken by the chirp of the birds.

Though it is called the Tiger View Point, spotting a tiger or a leopard is very difficult, considering that there are only 25 to 30 in all, going by the latest survey this May, that uses scat and pug marks collection and photographs.

Saleshwaram Temple of Shiva
The Lord Shiva Temple located in the Tiger Reserve of Nallamala forest is situated nearly 30 kilometers from Mannanur in Nagarkurnool district and is accessible by road.

This pleasant temple is located in a deep valley. The specialty of this temple is that it remains closed throughout the year, except for the five days during (March-April). Even the roads to the temple are always closed except for these five days. People here believe that visiting the temple on moonlit nights of on chaitra pournima is auspicious.

It is famous for its wedge-shaped water fall,which seems to have been chiselled across a huge stone. The Shiva Linga is in a cave next to the waterfall.

Lingamaiah Jathra, a fair will be organised in Saleshwaram temple, once in two years. It attracts thousand of devotees towards the temple.

The temple is located in a remote forest region. Tourists can stay at Mannanur forest guest house

Maddi Madugu Hanuman Temple located in Maddimadugu Village, Amrabad Mandal, Telangana State India.   A Temple built where statue of Hanuman was apparently found facing South-West. According to the story the statue refused to be oriented in a more auspicious direction hence the temple by its side is a temple of goddess miasmma to whom the shepherds offer a sacrifice before they enter the forest with their flocks in July.

Telangana Bull in the ring for recognition
There is a typical kind of cattle belongs to a special breed from the Telangana State, which has no less than any reputed international class but unfortunately forgotten for the ages. Despite facing drought conditions, these cattle have been surviving since centuries but visible only in Nallamala region of Telangana.