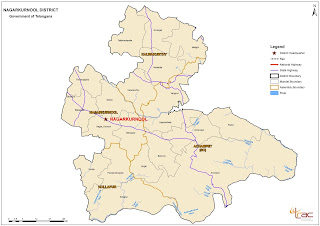 Nagarkurnool district is one of the 31 districts in the state of Telangana. Nagarkurnool was carved out
of Mahabubnagar district and was made as a district on October 11, 2016.

Nagarkurnool was a district 100 years ago. It was a separate district during the period of 1794-1904. After a railway line was built to Mahabubnagar for the sake of easy transportation district headquarters was moved from Nagarkurnool.

Nagarkurnool is the district headquarters with a population of 42,000.

Nallamalla forest is located in Nagarkurnool district. Nagarjunasagar-Srisailam Tiger Reserve, which is the largest tiger reserve in India, in spread in this district.

Industries
There is cotton industry in Kalwakurthy.

Proposed
Palamuru Rangareddy Lift Irrigation project is a Major Irrigation Project at Karvena village of Bhoothpur, Mahabubnagar district is approved by government and taken up with an estimated cost of Rs.35,250 crore and seeks to irrigate about 10 lakh acres in Mahabubnagar, Ranga Reddy and Nalgonda districts besides providing water for drinking and industrial needs in and around Hyderabad.