A sprawling ancient fort in the region is the massive 8 km-radius fort wall with seven entry points dating back to the Satavahana period.


Locally known as Mallur Fort, located 4 km inside the forests near Mallur village of Mangapet mandal, Jayashankar district, the fort is on the banks of the river Godavari adjacent to the Eturunagaram-Bhadrachalam highway.

“Normally, forts are two to four km in radius. But this fort wall has a radius of about 8 km, much bigger than Warangal and Golconda forts. 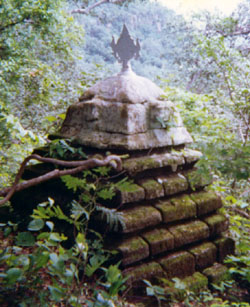 The famous Mallur Temple of Hemachala Lakshmi Narsimha Swamy is the most ancient architectural divine ensemble which is located on the Mallur Ghat in the Mangapeta mandal of Jayashankar Bhupalpally district.

Situated in the beautiful mountain ranges on the southern bank of Godavari, this temple is famous for its Swayambhu deity with a vast historical background and cultural heritage. It is a well known fact that the name Sri Hemachalam came into existence due to the oldest beliefs in these traditions and customs.

The beautiful and mellifluous nature around the temple premises is beyond description. The splendid scenery surrounded by the mountain ranges along which pass the narrow path, outlined by different varieties of medicinal trees through which flows the Chintamani Lake a quenching delight to all the devotees all through the year and a source of water resource for the people staying in this place. It is no exaggeration to say that this deified environment cannot be seen in any other place of historical richness.

All along the path towards the divine shrine, there are bore wells laid in order to give respite to the traveling devotee s and there is a water tank being constructed on the divine hillock (ghat) along with power supply being given during the Jataras for a comfort able darshan of the deity by the devotees.

The temple is ever-enduring with year-long festivities which mark the commencement of special archanas and sevas giving a festive mood to all and sundry all through the year.

The Tirukkalyanam and the Brahmotsavam of the residing deity, the Hemachala Lakshmi Narasimha Swamy are celebrated on Vaishakha Shuddha Chaturdashi, every year with much devotion and fervour in this divine land and offer monetary support through donations and gifts and strengthen the historical significance of the place and fulfill their dreams, desires and ambitions by seeking the blessings of the lord Narasimha swamy.

This temple has many specialities, the height of mollaviraat Sri Narasimha Swamy is upto 10 feet. It is located in the midst of forest. The Belly part of Moolavirat idol is soft as human skin.
The dwjasthambha here at the temple is nearly 60 feet in height.

There is a rockformed Ugra Anjaneya Swamy Statue near to the temple. There is a photo of it above in this post. It is the first of its kind known in South India. There is a continuous water flow near the temple, where its from the top of the hills.
According to the historical stories, the demon king, Ravana had gifted this place to his loving sister, Shurpanaka where around 14000 demons lead by Khara Dushana were done to death by the great Rama. It was Agastya , the great sage who gave the present name to the shrine as Hemachalam.

There is a belief exhibited by the devotees that the deity, if alone, enflames the temple premises. But as the deity is affixed with a golden Goddess Lakshmi on his chest region, the deity assumes tranquility thus lessening the troubles due to fire accidents. It is a divine wonder to note that the sandal in the fluid form flows through the Umbilicus of the great Maha vishnu. Understanding the gravity of the miracles that the temple holds for itself, the devotees in large number throng to the temple to offer their prayers to fulfill their wishes, to beget children or to redeem themselves from sins and obstacles (doshas) that a student faces during his life career. There are many stories that are depicted regarding the miracles exhibited by the deity.In this temple of fervour and devotion reside, the Yogananda Swamy accompanied by the Goddess, Sri Lakshmi, Hanuman as the Kshetrapalaka and Gods and Goddesses like Uma Maheshwara and Sri Venugopalaswamy to name a few.
Based on the historical significance of this great temple, it is assumed that this temple has been a center of religious prosperity even in the periods ruled by Krishnadevaraya and the Kakatiya kings. Looking at the regal grandeur of ornamentation of the deities and the funds released and the lands donated by these kings towards temple administration and governance give a feel of an affluent heritage of this enormous temple. According to the Chinna Jeeyar Swamy , the Ramalayam in Mallur is older and the residing deity is taller than that of Bhadrachalam . presently, this temple is in ramshackle. It is our responsibility and earnest duty to help restructure it to uphold the cultural prosperity of the Hindus and the rich heritage of India.

Travel
Presently, the 4 KM runway to the temple premises is being journeyed through various transportation facilities by the devotees to reach His shrine. The ITDA Eturunagaram has developed pucca roads in place of the unaccommodating and inconvenient roads thereby making the trava il of the devotees easier.
90 Km from Bhadrachalam and 130 KM from Warangal City.