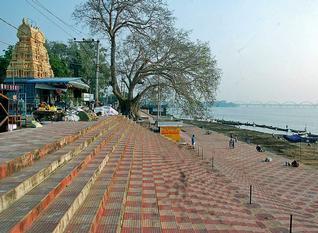 Kotilingala is a historical site nestled amid huge hillocks and thick green cover on the banks of the Godavari River, Velgatur Mandal, Jagtial district of the Indian state of Telangana.

Archaeological discoveries at Kotilingala indicate that it was an important town in ancient town, during the period of the Assaka mahajanapada and the Satavahanas, is a treat for pilgrims.

The site has a mud fort with several gates and running 1054 metres long and 330 metres wide. A watch tower located in the south-eastern corner measures 11.5 * 10.55 m.

Ancient pottery, beads, bricks querns, and other artifacts have been found at the site.

Two hoards of punch-marked coins attributed to 2nd and 3rd centuries BCE have been found at the site. These coins were issued by Gobhada and Samagopa, who are believed to be local pre-Satavahana rulers.

The mud fortification, protected by a stream on its east and the Godavari river on its west, indicate its high political and commercial significance.

The archaeological evidence at Kotilingala suggests existence of long-distance trade.

Coins of Satavahana kings have also been found at Kotilingala. A few of these are copper and potin coins bearing the legend "Rano Siri Chimuka Satavahanasa". Some scholars such as A. M. Sastry and K. D. Bajpai have identified the issuer of these coins with Simuka, who is considered as the founder of the Satavahana dynasty based on the Puranic genealogies. However, others such as P. L. Gupta and I. K. Sarma have argued that the Kotilingala coins belonged to a later ruler with a similar or same name have disputed this identification. P.V.P. Sastry, who first discovered these coins and attributed them to Simuka in 1978, also changed his view and later stated that Chimuka or Chhimuka of Kotilingala was not same as the Simuka mentioned in Naneghat inscription.

Other coins include those issued by Kanha and Satakarni. The inscriptions of the early Satavahanas have been found only in present-day Maharashtra (at Nashik and Naneghat), based on which western Deccan has been proposed as the original home of the Satavahanas.

However, the discovery of coins at Kotilingala and other sites in present-day Andhra Pradesh and Telangana has prompted some historians such as M. Rama Rao to theorize that the eastern Deccan was also a part of the early Satavahana territory. V. V. Krishna Sastry theorized that the site was once a stronghold of the early Satavahanas.

D. R. Reddy and S. Reddy proposed that Kotilingala was the original homeland of the Satavahanas. However, the Satavahana coin samples from Kotilingala are small in size, and it is not known where these coins were minted. S. Chattopadhyaya argues that coins can travel via trade, and this is not conclusive evidence of the early Satavahana presence in eastern Deccan.

The State government has decided to construct a protection wall along the shores of river Godavari to protect the site from submergence under the backwaters of the Sripada Yellampalli project.

There were transportation facilities to the towns located on the bank of the river Godavari such as Godavarikhani, Jagtial, Mancherial, and Karimnagar.

It is also a Hindu Pilgrimage Site with traditional Shiva temple and the Koteswara Siddeshwara Temple.

The traditional Sri Koteswara Siddeshwara Swamy Devasthanam temple with picturesque background is about 60 km from the Karimnagar.

A good black-topped road from Karimnagar to Rayapatnam takes the pilgrims to the temple in Velgatur mandal. A three-km drive from the main road takes one to the temple.

Legend has it that sages used to meditate in the caves adjoining the hillocks called ‘Munula Gutta’ and visit the banks of the Godavari for bathing. The sages decided to construct a temple and asked Lord Hanuman to get a Siva Lingam. When Lord Hanuman failed to come on time, the sages installed a Siva linga made of sand granules.

By the time Lord Hanuman arrived the Siva lingam was completed leaving the former infuriated. Locals say, Hanuman was pacified and people were asked to first offer prayers to the lingam brought by Hanuman and later to the lingam made with sand granules. According to temple priest Sanjay Sharma, newly-wedded couples offer prayers at this shrine for happy family, good siblings and prosperity.

Koti Lingala has a hoary past as the Satavahana kings used the Godavari for navigation and transportation of goods. It is evident from the wharf on the banks of the river. Buddhism and Jainism also prevailed in the region on “Munula Gutta’ as was evident during the excavations made by the State Archaeology Department.

Pilgrims planning to visit the temple can stay in hotels that suit everybody’s pocket. There is not enough accommodation in the temple nor does the place have good restaurants. Some pilgrims prefer to visit the shrine and cook food in the nearby woods and return in the evening. It is also one of the convenient places during the Godavari Pushkarams because of less flow of pilgrims.