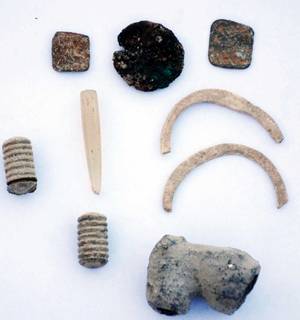 The coins belonged to Mahatalavara, feudal lords who ruled parts of Telangana under Satavahana

“Mahatalavara, a feudatory family that ruled parts of Telangana under Satavahana and also during post-Satavahana period, had minted these coins, the archaeology officials said.

The archaeologists identified the coin belongs to Mahatavalaras since the two lead coins were having horse symbol on obverse side. They could not identify the symbol on other side of these coins. The copper coin was rusted and they could not identify anything on it.
Conarium rod
They have also unearthed a crystal-made 0.06 cm long conarium rod, which the ancient women used for decoration of bindi on their forehead. And they have also found big size bangles made of shell.

Mr. Bhanu Murthy said that after finding these coins they came to a conclusion that Mahathalavaras also ruled Pazzur area apart from above places.