December 08, 2016
Jayashankar Bhupalapally is a district in the Indian state
of Telangana was made as a district on October 11, 2016.

The district headquarters are located at Bhupalpally. It was a part of the Warangal district prior to the re-organisation of districts in the state.

Jayashankar district was named after Acharya Jayashankar who was a prominent activist in Telangana Movement. District headquarters is located at Bhupalpally, 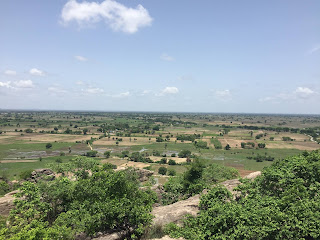 Irrigation
Major Projects - Under Construction
Kaleshwaram (Medigadda) project is located in this district.

Medium Projects
Gundlavagu project is an ongoing Medium Irrigation scheme proposed across the river Gundlavagu, a minor tributary of Godavari near village Pragallapally in Wazeedu mandal of Jayashankar Bhupalpally District of Telangana. This scheme envisages construction of an earthen dam for a length of 508m and H.C weir of length 51m. The project is proposed to irrigate an ayacut of 1,045 ha (2,580 acres) under right and left bank canals benefitting five tribal villages of Wazeedu Mandal.

Ramappa Lake Project was constructed across the Medivagu & Polavagu River / Stream, which is a tributary to the Godavari River.
The Project is located near Palampet village, Venkatapur Mandal.The scheme is intended to irrigate an ayacut of 5000 Acres

Malluruvagu Project was constructed across the Malluruvagu River / Stream, which is a tributary to the Godavari River. The Project is located near the Narsimhasagar village, Mangapet Mandal to irrigate a total ayacut of 7504 acres