December 10, 2016
Dornakal, one of the sleepy towns in the district, is known for two things. One is the railway junction 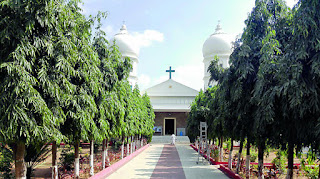 which connects South India; the other is the Epiphany cathedral of the Dornakal diocese.

The Cathedral Church of Epiphany of Our Lord, popularly known as Dornakal Church that celebrated its centenary two years ago, is still holding light for millions of poor spread across the country.

“The construction of this church was initiated in 1912 and it was dedicated in 1945. This was initiated by the first Anglican bishop, V.S. Asaraiah, who is more popular in the United Kingdom for his missionary work,” says the Bishop of Dornakal Diocese, Vadapally Prasada Rao.

But unfortunately he died in an accident in 1945. It was here that the movement for Church of South India began and fructified in 1947.

He strongly believed in forming a communion of our own instead of the Anglican Communion and strived for it.  Ever since he came to Dornakal as a missionary, he strove for the poor. Making a modest beginning, the Dornakal Church now runs a degree college, six high schools, including one for the hearing and speech impaired, 25 hostels and child care centres, 11 primary schools, the St. Mary’s Hospital at Khammam and the Bishop Whitehead Hospital at Dornakal. It is into many social welfare projects as well.

“There is lot of demand for admission to the hostel and school for the speech and hearing impaired, and we have people from all religions here — Hindus, Christians and Muslims. We do not go by caste or religion but only by need,” Right Reverend Bishop Prasada Rao says.

Through its architecture and activities, this church has endeared itself to many. It is a symbol of hope for the tribal people and the poor cutting across religions. The architecture of the church reflects the essence of all religions — the front portion is similar to temples with choultry-like structure; its two minarets resemble a mosque and the interior architecture is typically Christian. On a closer look, it resembles the Madurai Meenakshi temple, certain portions of which have been replicated here.

The church is famous worldwide, as the only church which is constructed with indo-saracenic architecture where religious structures of various religions can be seen. And also because of its architect Bishop Vedanayagam Samuel Azariah who is also the first Indian bishop in the churches of the Anglican Communion. He is considered as a pioneer of Christian ecumenism in India.

Christmas is celebrated on a grand note here. People from across the globe visit the church and take part in the prayers this time of the year.

The diocese mainly covers the pastorates in Warangal, Nalgonda, and East Godavari and Khammam districts and also has churches in Odisha state constituting to about 1,000 churches. The diocese also runs missionary schools and colleges under it.

The present bishop of the church, Rt. Rev. Dr Vadapalli Prasada Rao, said the church is run completely with Indian funds since its construction and to this day does not receive any foreign funds to keep Bishop Azariah’ idea of running churches in India independent of the Anglican Communion. With Christmas just few days away, the bishop, in his Christmas message hoped for peace in the nation and explained that God created Jesus to restore divinity to his creation.


The Dornakal Church is affiliated to the Church of Canterbury in England. It does not receive any foreign funds but raises it through local charity and donations to run its activities.