December 10, 2016
Historic Sri Veerabhadra Swamy temple is in the Kuravi mandal of the Mahabubabad district in Telangana State, India. This temple is dedicated to Lord Veerabhadra swamy,who is fierce looking Diety with three eyes and ten hands. 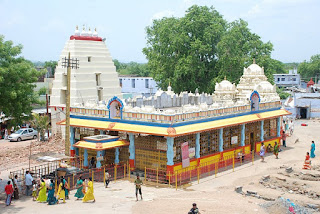 According to local lore, the Kuravi Veerabhadra Swamy temple was said to have been built during 900 AD by Bheema Raju of Vengi Chalukya dynasty. Later the renovation of temple was taken up by Kakatiya ruler Betharaju I.

The reference of this temple has also made by the famous traveller ‘Marko-Poli’ as it stood as the capital of Vengi Chalukya Dynasty.

As Kakatiya kings were known to be followers of Lord Shiva, they constructed several temples across the empire and improved those already existed.
Peddacheruvu is spread over on 100 acres of land and is just one kilometer to the historic Lord Veerabhadra Swamy temple. It has got excellent potential for development into a tourist spot.

Kuravi is unique for its culture. Lord Veera Bhadra Swami and Bhadrakali temple is famous in temple. So many Tribel and non-tribel people comes to temple to get blessings of the god. Maha siva rathiri festival is biggest event in Kuravi. Other festivals people celebrate in Kuravi are "Bathukamma", "Bonalu", etc. Villages under Kuravi mainly depend on crops like cotton and chilli.Every monday there will be a big cattle fair(angadi)in the village.Farmers from all places comes to purchase and sell their cattles.

History of the Temple
This temple is believed to be constructed by the famous ruler 'Bheema Raju' of Vengi Chalukya Dynasty and renovated by the Kakatiya ruler 'Betharaju-I. The reference of this temple has also made by the famous traveller 'Marko-Poli' as it stood as the capital of Vengi Chalukya Dynasty. The presiding diety is Lord Veerabhadra swamy is fierce looking Diety with three eyes and ten hands. The annual jathra Brahmotsavams will be celebrated during the mahasivarathri Festival.

Mahabubabad (commonly and informally known as Manukota ), is the official name of a place or location in Warangal District of Andhra Pradesh State in India. It is the second largest town and second biggest revenue division in area and population, after Warangal in Warangal District. It is well known for its historical and traditional importance. Mahabubabad is 180 km northeast of the state capital of Hyderabad.

Airport: The nearest airport is Rajiv Gandhi International Airport, Hyderabad, 200 km, and the nearest aerodrome at Warangal 60 km, (This is being under upgradation to the level of airport, by the joint participation of AAI and Govt. of A.P). Vijayawada Airport (distanced approximately 150 km).

Rail: Mahabubabad is well connected to all the major cities in India by rail. Mahabubabad has one of the busiest railway stations in the Kazipet-Vijayawada route. Kazipet is the Zonal/Divisional headquarters. Kazipet/Warangal is about approx 70 km from Mahabubabad and is a major railway junction, which also includes a diesel-electric locomotive facility. Kazipet is also known as the GATEWAY TO NORTH INDIA. Famous trains which halt at this station include Charminar Express, Padmavathi Express, Satavahana Express, Intercity Express, Simhapuri Express, Golconda Express, Navjivan Express, Dakshin Express, etc. It is located 61 km from Warangal and 47 km from Khammam.

Road: The temple is located in Kuravi. It is about 11 Km away from the Mahabubabad Railway Station & Bus Station and is well connected by city bus service.