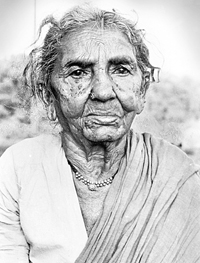 Chityala Ailamma's struggle to establish her right to cultivate her own landmarks in a sense was the beginning of the Telangana Peasant Struggle.

She became an inspiration for many people in Telangana region.

She took 4 acres of land for rent (koulu) to cultivate land from a local landlord kondala rao. But, Patwari Veeramaneni Sheshagiri rao did not like that and started giving trouble to leave the land and asked her to come work in his own field.

Around the same time Andhra Maha Sabha led by Communits gave a call to revolt conducted many militant struggles against zamindars and deshmukhs,against the practices of vetti (beggar – forced labour), against illegal exactions and against evictions of cultivators from their lands.

She joined Andhra Maha Sabha and inspired her whole family, her sons and daughters to be with the Party throughout, through thick and thin. Her house had been the centre of Andhra Mahasabha and Communist Party activities against the landlords. She fought not only for her personal case – this only symbolised and signalled the beginning of the mighty struggle of the Telangana peasant for land.

Patwari Veeramaneni Sheshagiri rao complained to Visunur Deshmukh Ramachandra Reddy that she joined communists and got her husaband an d sons arrested.

Being independent minded and courageous, she resisted the attempts of the notorious deshmukh to occupy her land and merge it with his own.
In the summer of 1946, Visunuru landlord planned to take away the harvest and evict her from the land, planned to seize the harvest directly from the fields. Just before this at a public meeting held in that village, he had sent his goondas to murder the Sangham leaders. But the people had foiled his plans and had beaten black and blue the goonda leader, Onamala Venkadu. On this pretext, the landlord arrested 14 of the Sangham leaders and lodged a case for attempted murder against them. Involved in this case were the leaders of the Sangham from that village, taluka and district. People were scared. Under these circumstances, Visnur Ramachandra Reddy thought that no one would obstruct him from taking possession of Ailamma’s lands.

He sent 100 goondas and 100 farm servants, men and women, to gather the harvest. Then the Sangham leaders and 28 volunteers, staking their lives, and armed with lathis and shouting slogans attacked the goondas. Hundreds of peasants, women as well as men, helped her to gather them and defended them with slings, stones, chilli powder and pounding sticks, Seeing these volunteers marching in formation with lathis and with fierce determination on their faces, the goondas ran for their lives. No one was left behind. The harvest was gathered and was sent to Ailamma’s house. The same night police from Visnur arrived but they dared not touch the harvested grain stored in Ailamma’s house. This incident roused the spirit of the people.

Next morning, 6 leaders including Bheemireddi Narasimha Reddy, Chokilam Yadagiri Rao, Nallu Pratapa Reddy, Katkur Ramachandra Reddy were arrested and taken to Visnur police station. At mid-night, they were taken with shackles on their hands and feet to the kutcheri house, there they were beaten severely, their heads were thrust in the ovens, chilli powder was thrust in their anus, urine was poured into their mouths and many other acts of fascist brutality were committed. But in spite of all this, Ailamma’s harvest and lands could not be seized. This victory over Visnur Ramachandra Reddy, the notorious deshmukh, enthused and gave courage to the people of the whole of Telangana. Long after this, the people used to describe this heroic struggle and sing songs about it.
But in spite of all this, Ailamma's harvest and lands could not be seized.

Songs were written on the incident of Ailamma’s land struggle attracted the women a lot. For the first time, the problem of land, eviction and vetti and forcible grain levies which had become the problems of their life, were connected with the slogan of abolition of zamindari, and that was the main feature of this period.

My daughter's name is Somu Narasamma. She had two children. She had a small infant, new-born, they beat her up and raped and my son-in-law did not take her back. May he be ruined. The sangham people could not do anything when my daughter was ruined said Ailamma.

Today if you help one person it is as if you have done a great thing.

It is my name that has stood. Wherever I go the [party] folk come and say, 'one should be like Ailamma'”

How can the dream of a new order that the Sangham (organiz- ation) spoke ofever leave us and how can that hope die?' asks Chityala Ailamma.