Kulpakji or Kolanupaka Jain Temple is at a distance of 83 km from Warangal and 81 km from Hyderabad, the 2000 years old Jain Temple of Mahavira is located in Kolanupaka village (also called as Kulpak) in Nalgonda district.

The temple is decorated with beautiful images of Tirthankaras and it's one of the important Jain pilgrimage sites in the country. It is also a popular place to visit around Warangal & Hyderabad. Kulpakji is an important pilgrimage center for Swetambara Jains of South India.

According to the mythological legend, the main temple of Kolanupaka is said to have been built by Emperor Bharata, son of King Dushyanta and Queen Sakuntala. Jainism was prevalent in Telangana before the 4th century and Kolanupaka was one of the prominent centers of Jainism from early times. About 20 Jain inscriptions have been found there. It is said that Kolanupaka flourished as Jain center during the Rashtrakutas period.

The architecture of the temple is stunning with wonderful carvings on the temple walls. The Jain temple of Kolanupaka was made using red sand stone and the pillars of temple are made out of white marble. The temple was in a ruined condition for years and was renovated in late 20th century. The temple was renovated by employing more than 150 artisans from Rajasthan and Gujarat. The old garbhagruha was preserved and a complete new temple was created surrounding the existing tower. The temple is spread over in an area of 1 acre, out of a 20 acre land used for dharamshalas and guest houses. Regular visitors are not allowed to enter into the inner section of the temple which is restricted for people with pooja clothes only. 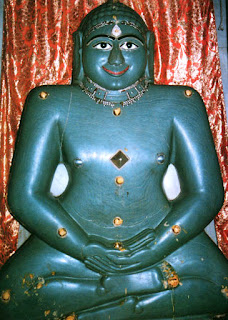 There is also a temple called Someshwara Temple which was established by Chalukya's about 800 years back in Kolanupaka.