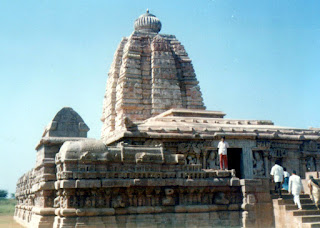 state of Telangana, India. Alampur is the meeting point of the sacred rivers Tungabhadra and Krishna and is referred to as Dakshina Kashi (also known as Navabrahmeshwara Theertha) and the Western Gateway of Srisailam, the famous Shaivite (Shaivism) pilgrim centre. The Sacredness of Alampur Temple is mentioned in the Skanda Purana. The principal deities at Alampur are Brahmeshwaraand Jogulamba. It is surrounded by the Nallamala hills. Alampur is situated on the left bank of the Tungabhadra river.

Alampur was under the rule of Shatavahana Ishvakus of Nagarjunakonda, Badami Chalukyas, Rashtrakutas, Kalyani Chalukyas, Kakatiyas, Vijayanagara Empire and Qutb Shahis of Golconda. Alampur was previously Known as Halampuram, Hamalapuram And Alampuram. Name of this place as Hatampura, mentioned in the inscription dated AD 1101 belongs to Western Chalukya Tribhuvanamalla Vikramaditya VI. The Alampur Navabhrama Temples are historically important and reflect remarkable architectural skills.

The Alampur temples are listed as an archaeological and architectural treasure on the official "List of Monuments" prepared by the Archaeological Survey of India under the The Ancient Monuments and Archaeological Sites and Remains Act. Since the original area of the temples at Alampur came under submergence due to the building of Sri Sailam Hydro-electric Project, the temples were relocated to a higher place. The uniqueness of this group of temples lies in their plan and design in the northern architectural style introduced by the Chalukyas of Badami between AD 650 and 750.

The Yogamba (Jogulamba) temple is regarded as a Shakti Peetha where Sati Devi's upper teeth fell. The mythology of Daksha yaga and Sati's self immolation is the story of origin of Shakti Peethas. The original temple was grounded by Muslim invaders in 1390 A.D. Later the temple was rebuilt after 615 years.

Shakti Peethas are shrines which are the most divine seats of the Mother Goddess. The body parts of the corpse of Sati Devi has fallen in these places, when Lord Shiva carried it and wandered throughout Aryavartha in sorrow. There are 51 Shakti Peeth linking to the 51 alphabets in Sanskrit.

Alampur Navabrahma Temples are located at Alampur in Telangana. There are a total of nine temples, dedicated to Shiva. These temples date back to the 7th century A.D and were built by the Badami Chalukyas rulers who were great patrons of art and architecture. The Sacredness of Alampur Temple is mentioned in the Skanda Purana. It is mentioned that Brahma performed a strict penance here for Lord Siva. Lord Siva appeared before him and blessed him with the powers of creation. Therefore, the name Brahmeswara.