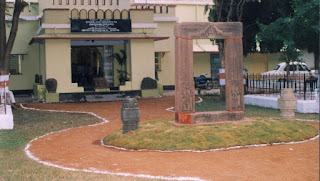 The District Archaeological museum in Nizamabad was established in Nizamabad’s Tilak Garden, which was originally constructed in 1936 by VIIth Nizam, Mir Osman Ali Khan. The District Archaeological Museum was officially opened to the public in October, 2001. It exhibits a wide variety of artefacts and antiquities that represents the evolution of human civilization right from Paleolithic era to Vijayanagara times (16th Century A.D.).

The Archaeological section mainly includes tools of Paleolithic, Neolithic as well as late stone age times, (Microlithic) from 50000 to 5000 B.C. and also the megalithic pottery and iron implements from 1000 B.C. to the 3rd century B.C. The museum displays early historic and cultural material of the Satavahana times such as pottery, Iron implements, bangle pieces, beads, terracotta and bricks dating back from 2nd Century BC to 2nd Century AD. The Coins housed in the Museum are of punch marked varieties (3rd - 4th Century BC to the British period). A hoard of Vijayanagara era’s Gold coins unearthed at Bodhan is displayed here.
The collection includes coins of Satavahana dynasty, Vishnukundins, Kakatiyas, Ikshvakus, Qutub Shahi dynasty, Vijayanagara, British period etc., along with a Quran Sharif of medieval period. A chart which shows the evolution of Telugu script from the 3rd century B.C. until 16th century A.D can also be seen here.

Bidriware derives its name from the old town of Bidar. The bidri articles that are displayed here in the Museum are Huqqahas, Pandan, Spittons, Flower vases, Betel Nut Boxes etc. and other items. Most of these artefacts were brought from Hyderabad by the Department of Archaeology & Museum.

Several armour varieties of ancient world are displayed here such as the Roman, Persian, Russian and Indian Armies of medieval period. These include Persian Indian swords, lances, spears, daggers, chest plates, suns and arrows with damascening ( with an inlay of gold work) workmanship, offensive weapons such as the lances, spears, the axes and heavy swords accompanying double edged flat blades. The weapons were reportedly used by the Nawabs of Golconda during the medieval period. Coins, Manuscripts such as the Holy Quran, Pre-history objects, Stone Sculptures of Early history, Modern Paintings and Miniature painting are also part of the impressive display in the Museum at Nizamabad.

The District Heritage, Archaeological Museum in Nizamabad is located in Tilak Garden, very near to the Bus stand and Railway Station. Nizamabad can be reached by road from Hyderabad, nearly 175 km away.

Clean drinking water and rest rooms are available. Seating arrangements have been provided in the garden. A Companion Guide to the Museum is also available.
Timings : 10.30 AM to 5 PM. Closed on Fridays and Public Holidays.
http://www.telanganamuseums.com/dist-museum-nizamabad.html