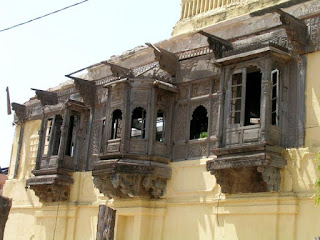 Gadwal is is situated between the rivers Tungabhadra and Krishna over an area of about 800 sq.miles. Located on National Highway No. 44 in between Hyderabad and Kurnool and is only 16 Kms away from Erravelli Junction.

At a distance of 1 km from Gadwal Bus Station, 78 km from Mahabubnagar Bus Station and 188 km from Hyderabad, Gadwal Fort is situated in Mahabubnagar district of Telangana. Gadwal is one of the popular historical places to visit around Hyderabad.

Gadwal Samsthanam was a vassal of the Nizam of Hyderabad.
After the fall of the Warangal Kakatiya dynasty in the 14th century, Gadwal transferred its allegiance to the new Bahmani kingdom.
Gadwal existed long before the foundation of the Hyderabad State.

In honor of his service, Aurangzeb awarded him the title of raja in 1696.

The fort was constructed from 1663 - 1713 AD by Raja Somanadri. The Fort was constructed with huge walls and moats around the fort have made the Gadwala Fort very strong and impregnable. Even after completion of 300 years, the strength of the Fort is not lost.

Raja has defeated the Nawab of kurnool and brought 32 feet long Cannon which was the biggest in the country is still in the fort.

This Gadwal Samsthanam was protected by Mallichetti vamshiyulu. The Nagi Reddy we fondly know Nagappa was an Ayngarashakulu of Gadwal samsthanam (Raja somanadri was a minor). He died in a war with fanatic sultans. Then Narsappa succeeded his father Nagappa as Gadwal Samsthanam Ayngarashakulu, but unfortunately for some reason he had to leave the palace
The tradition of the Gadwal weavers’ family presenting vastrams to Lord Venkateswara began during the reign of Nala Somanadri Raja of Gadwal Samstan. He was a friend of Nellore Venkatagiri Rajus and he travelled to Tirumala along with the Venkatagiri Raju family. It was then that the Somanadri Raja promised to offer ‘Sesha Vastrams’ to the Lord on the first day of the Brahmotsavam, recall the family members.

The Konkathi family from this town in Mahbubnagar district has been weaving ‘Sesha Vastrams’ for the past 10 generations, on a decree from the Gadwal royal family. The family brings superior quality cotton from Coimbatore in Tamil Nadu and Chirala in Andhra Pradesh. The weavers, adopting the traditional practice, work for over six hours a day to weave the vastrams. It costs nearly Rs 15,000 for raw materials and the total would jump to around Rs. 40,000 by the time the vastrams are presented to the Tirumala Tirupati Devasthanams. It takes more than six weeks for a select group of five handloom weavers to produce the five-metre-long white vastrams (dhoti) with a maroon colour silk border.

1712 AD : Raja Tirumal Rao
Soon dissatisfaction arose among the people due to tirumala Raya's rule. It was the time when Ammakkamba wife of Pedda Soma Bhupla was seated on the throne.


Amongst the prominent Hindu feudatories, or Samasthans as they were known, was Gadwal, whose allegiance was eventually secured by the first Nizam - the Mughal governor of the region. Gadwal’s military and economic relationships with other groups and the ruling princely elite had historical precedents, Cohen points out. Interestingly, he writes of the first decade of rule of the first Nizam, Nizam ul Mulk Asaf Jah I, who during this period sought to consolidate the uncertain ground that he had only just occupied through imperial legitimacy in 1724 CE (after the death of Mubariz Khan). In this early venture, the Nizam entered into communications with two women, Rani Ammakka and Rani Lingamma of Gadwal, seeking their military support, over the course of a year. The ‘urgent’ request, ‘an earnest requisition’ by the Nizam on 3 September 1727 to the two women was ignored by them, but upon a series of firmer ‘diplomatic entreaties’, they eventually acquiesced in early 1729 CE. Cohen comments that this may seem ‘remarkable’ today but is “less shocking in a more fluid eighteenth century”.

Gadwal is known for its handloom jari sarees (Gadwal sarees). The local weavers can weave the 5.5 meters of saree fabric in such a way that it can be folded down to the size of a small match box. Gadwal sarees have been worn since the 1930s. There are cotton sarees with an attached silk border and silk pallow. For Lord Venkateswara TTD Brahmotsavam starts with Gadwal weaved Gadwal saree by every year.