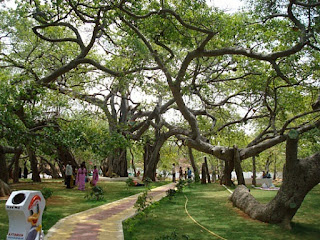 Pillalamarri is located about four km from the city and 90 Km away from Hyderabad City.
There is a tomb of a Muslim saint under the tree. The tree presents the appearance of a small hillock with green foliage from a distance but on reaching closer, it looks like a large green umbrella under which about thousand people can easily take shelter.It is 700 year old banyan tree and its branches extend over an area of 3 acres. In Telugu, "Pillalu" means children & "marri" means a banyan tree.


The banyan tree is so widely spread that one could not see the main trunk of the tree. The Pillalamarri gives an appearance of a small hillock with green foliage from a distance, but as we reach closer it is viewed as a large green umbrella and assumed to be as a shelter for more than about thousand people.
There is also an aquarium, a small zoo and an archaeological museum here. There is a boating facility in the premises of Pillalamarri available only during the rainy season.
Pillalamarri District Archaelogical Musuem consists of numerous historical idols & articles of ancient people, which represents their culture & civilization. Unfortunately beacause of invasions of various rulers many of those are destroyed. But still there is a lot to see.