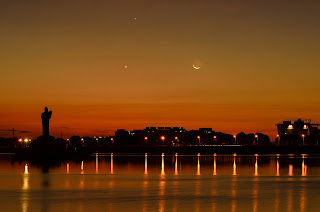 Hussain Sagar is a lake in Hyderabad, Telangana, India. It is spread across an area of 5.7 square kilometers and is fed by River Musi. Maximum depth of the lake is 32 feet

1562 - 1563
Ibrahim Quli Qutub Shah commissioned the construction of the lake in 1562. Sufi Saint Hussain Shah Wali, the son-in-law of the king, was entrusted the duty of overseeing the construction work of the lake. Apparently, the lake became so deep and big that it remained empty for a few years and they had to bring an additional channel of water from the Musi to fill it up. "Legend has it that one day, the King went to take a look at the lake after the construction and was more than irked to hear a bystander call it the Hussain Sagar Cheruvu. He had spent a fortune to build it and he was miffed that he got no credit for it. So, the king ordered the construction of Ibrahimpatnam Lake," says Salil Kader, a researcher and a former professor of History, Moulana Azad University.


12 April 1992
An 18-meter high monolithic statue of Lord Buddha towers over the lake from atop the Rock of Gibraltar. The idea of erecting a giant monolith Buddha statue in the midst of Hussain Sagar lake on the Gibraltar rock was a part of the Buddha Poornima project in 1985. The statue was chiseled out of a white granite rock, weighting 450 tons. It was carved by 200 sculptors for two years. The statue was transported to Hyderabad in November 1988. After initial problems, the statue was erected on 12 April 1992 on a red lotus pedestal.

"The Tank Bund used to be the prized walkway of the city with its pristine surroundings. Many famous people of Hyderabad, liked to take their evening walks there, the most prominent of them being Nawab Dawood Jung, who built the first pavilion on the banks of the lake," recalls Nawab Shafath Ali Khan, the great grand son of Nawab Sultan Ali Khan Bahadur, erstwhile Prime Minister of Hyderabad State. "The sprawling artificial lake divided and united the twin cities of Hyderabad and Secunderabad," he adds.

It would be fair to say the lake bears testimony to all that's happened in Hyderabad. The city's first power station, the mint compound, the first telephone exchange, the Burgula Ramakrishna Bhawan, the Secretariat which was the erstwhile palace of Nizam Mehboob Ali Pasha, they all cropped up around the vicinity of the lake, some even encroaching upon it.

A fair share of effluents from the city's earliest industries in Patancheru also found their way in the Tank Bund as did sewage waters. The lake was also a notorious suicide point at one time. Even the Buddha statue took a dip in the waters before being resurrected amid much fanfare after a year. Add to the list, the innumerable Ganesh idols of all sizes, over the years. During the late 80s, the road on the Tank Bund was broadened and beautified with lawns and lined with 33 statues of famous personalities of the State. In the late 90s, the Necklace Road was constructed around the lake in keeping with the new Hi-Tech outlook of Hyderabad.