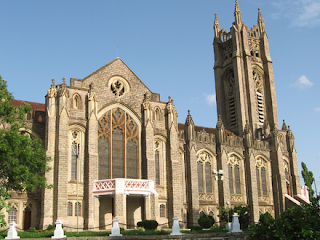 From 1914 to 1924 the farmers toiled to erect the church and Thomas Edward Harding, the architect, left no stone unturned in building the cathedral.

Located in the Medak Town about 90kms from Hyderabad, Telangana.

The Medak diocese, under the Church of South India (CSI) is the single largest diocese in Asia and the second in the world after Vatican.

The significance of the church is not only in its magnificence but also in the bond between poor and church. During World War-I, in late 1890s the district reeled under a famine. Moved by the plight of people, Rev. Charles Walker Posnett, proposed to build a great church in the year 1914. He evolved the 'food for work' programme so that the poor could find gainful employment. The villagers contributed to building the church, they could in turn earn food. That set the ball rolling for this renowned Gothic structure

Built on an extensive scale in pure white granite, this gothic style structure the magnificent Medak church stands on a sprawling 1000 acres of land. It took ten years to complete the monumental piece of architecture. With its massive dimensions, 100 ft width and 200 ft. length, the church can accommodate as many as 5000 people at a time. The 173 feet tall main tower is surrounded by four pinnacles. If it hadn't been for the Nizam, the church would have been taller. Old-timers say that when the cathedral was to be built, the Nizam had one condition, that the church should not be taller than the historic Charminar of Hyderabad.

What sets the Church apart are the three stained glass windows, created by Sir Frank O' Salisbury of London. They constitute 'the gospel trilogy' in art - the nativity, the crucifixion and the ascension. The stained glass work on the huge windows of the church offers a spectacular view during the daytime, which cannot be replicated by artificial lighting. This is the most fascinating feature of the church. It serves as a picture book on the Bible to those who cannot read. Each window is made up of small bits of painted glass which has been placed into a single piece and then delicately set into the stone windows.

All the stained glass windows have inscriptions in English, Hindi and Telugu. The Hindi inscription came later, at the instance of Vijaylakshmi Pandit, sister of Pandit Jawaharlal Nehru, who felt that the national language must find a mention on the stained glass.
The three magnifcent stained glass windows inside the cathedral depict different phases of Lord Jesus Chirsts life. The window to the north which offers a canopy to the altar is very fascinating. It depicts the scene of assertion of Jesus towering above the altar, dwarfing everything as Jesus ascends to heaven.

The other two windows decorating the East and West facades depict the scene of the birth of Jesus and his crucifixion. The bells cast especially for the church can be heard from far off.

Sir Frank Owen Salisbury (1874-1962) a Methodist artist from Harpenden in Hertfordshire, who specialised in portraits, large canvases of historical and ceremonial events, did the art work. Salisbury was known as "Britain's Painter Laureate" and his work was steadfastly conservative.

For the floor, tiles from famous potteries were shipped from England. Then, Italian workmen were brought from Bombay to lay them. The tile's design is an intricate one in six colours - red, brown, black, yellow, chocolate and grey.

The roof has been cast to ensure best acoustics and sound proof made by hollow sponge material to have an impressive style of vaulting. With its immensity and beauty, this century old church stands out as one of the finest examples of Gothic architecture in India.

Making the Medak diocese one of the biggest in the world, there are several educational, health and social institutions in the sprawling church compound. They include a B.Ed college, a junior college, hostels for boys and girls, an old age home, an office to take care of properties and an agricultural centre. There were also a hundred-bed hospital and a seminary to train pastors.