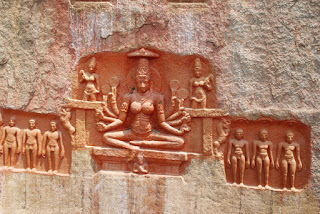 This place is situated near Kurikyal village,Gangadhara mandal in Karimnagar District of Modern Telangana state, India.

This place is about 18 kms from Karimnagar District headquarter in North West direction. The rock inscription underneath the Goddess Chakreshwari proclames the glory of Jainism and Adi kavi Pampa.


There is no approach road to reach the 200-mt high hillock. One has to sweat it out to climb up as there are no steps, an experience which will certainly be nightmarish. Tourists need to creep through the gaps of gigantic rocks, in order to have darshan of the Jain deities, which are carved out in 945 A.D.

The Chalukya King of Vemulawada, Arikesari-II asks Pampa to write an epic to immortalize him. Pampa takes up the work with utmost earnestness. Within one year, he creates Kannada’s greatest epic ‘Vikramarjuna Vijaya aka ‘Pampa Bharatha. Arikesari-II is greatly pleased with the work of Pampa. He bestows him with an honorific ‘Kavithagunarnava’ and also gifts him with an agrahara called Dharmapura.

Adi kavi pampa’s ancestors belonged to Kamme Brahman caste and devout to Jainism. His father’s name was Bhimappayya according to the inscription. They were hailed from angiparru in Vengi Nadu. Pampa who also renowned as Adikavi composed Vikramarjuna Vijayam and Somdevasuri composed Yasatilaka champu.

Pampa had a younger brother named Jinavallabha. He installs the idols of Chakreshwari and other Jain deities on a hill called Vrishabhadri, north of Dharmpura. He builds a Basadi named Tribhuvana Tilaka and also creates a garden called Madanavilasa. At the bottom of the hill he constructs a lake and names it ‘Kavithagunarnava’ as a tribute to his brother. Finally he inscribes all what he has done on a rock below the idol of Chakreshwari.

This inscription is of utmost importance to Kannada and Telugu languages. It is written in three languages viz Kannada, Telugu and Sanskrit. The Kannada portion contains invaluable information about Pampa. The Telugu portion is the oldest Telugu Kanda Padya. They are one of the important historical evidences, submitted to the Centre, for securing classic language status to Telugu.

The hill Vrishabhadri is now called Bommalamma Gutta. Dharmapura, Madanavilasa and Tribhuvana Tilaka have vanished. Kavithagunarnava is unrecognizable. But the idols of Chakreswari, now being called Seethamma, and other Jain deities are still there. Below the idol of Chakreswari the rock inscription remains proudly proclaiming the glory of Pampa.