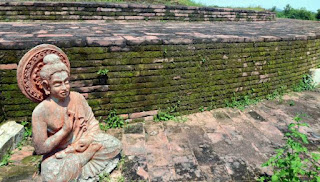 The Buddhist Stupa dating back to 2nd century BC and one of the 30 walled cities mentioned by Megasthenes located in Dhulikatta village of Eligaid mandal in Karimnagar district, Telangana lies neglected for several decades due to lethargy on the part of the government. Dhulikatta got its name from ‘Dhulikota’ that means a fort made of mud.


It is about twenty-five kilometres away from Karimnagar city.

The Archaeology Department had discovered the heritage structure in 1975 along the shores of a picturesque rivulet on the outskirts of Dhulikatta village. Barring the discovery of this early Buddhist stupa, the authorities have failed to take up any measures for the development and protection of the heritage site for the promotion of tourism.

In spite of several pleas by the historians and others, the authorities failed to provide road facilities to the ancient protected monumental structure. It is barely 33 km distance from the district headquarters, but still reaching the Stupa is a herculean task due to non-availability of road.

Due to non-availability of security at this structure, the miscreants had damaged the ancient monument and stolen away the antique veneer slabs and other panels and bricks. There were also incidents of miscreants digging the structure in search of treasure hunt. Literally, there is not even a sign board educating the people about the importance of ancient structure to attract tourists.

This Buddhist Stupa was constructed on a mound with light weight bricks. It is embellished with sculpted veneer slabs and beautifully carved limestone slabs. It is stated that site had attained importance as it was constructed with 47 slabs to enhance the dome with the Stupa.

Historians say that the Archaeology authorities had discovered other relics such as gateways built with light weight bricks, mahastupa, chatra, residential houses, wells, bangle pieces, ivory combs, gold objects, punch-marked coins, beads, coins of Romans and Satavahanas and seals. Majority of relics were shifted to the present Andhra Pradesh State Museum and only a few antiques lie in the Karimnagar museum.


The coins and the seals used by the Satavahanas and Romans were revealed by the excavations. This depicts that financial dealings between the two countries were prevalent at that time.
The sphere-shaped dome of the main Stupa was built by using forty-seven blocks of limestone and the blocks were adorned with symbols of ‘Muchalidanaga’, that according to Buddhist folklores means a serpent. Other than the Mahastupa there are other artefacts unearthed from the nearby spots, which are spiritually and historically significant. The Charmachakra Stupa is also very significant. The clay pottery used for household purposes which are of different colours such as red and black, depicts the vivacious life led the by the people of that era. A statue of a mother holding her child in the left hand, made of bronze is another significant work of art. The Buddhist symbol which is one the eight symbols and the footprints of the Buddha can also be found preserved here. Coins of different denominations and jewellery can also be found.
BEST TIME TO VISIT: It is advisable to visit this place from the month of October to March to explore the place.
http://beautyspotsofindia.com/dhulikatta-karimnagar/
http://www.thehindu.com/news/national/telangana/buddhist-stupa-lies-in-neglect/article7679926.ece