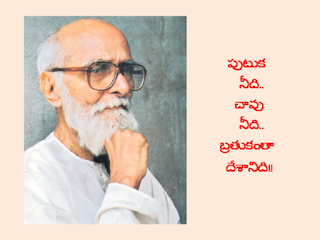 A giant of Telugu letters Kaloji Narayana Rao (9 September 1914 – 13 November 2002) born in Madikonda village of Warangal district Telangana. Real name is Raghuveer Narayan Lakshmikanth Srinivasa Ramraja Kaloji popularly known as Kaloji or Kalanna is a well known freedom fighter of India and a political activist of Telangana. He is known for his contributions in the social and literary.

Honoured with the Padma Vibhushan in 1992, the second highest civilian honour in India for his excellent service in the literary and social, Kaloji brings grace and distinction to the award. He is a recipient of Tamrapatra in 1972. He received the award for the best translation of the 'Jeevana Gita' work in 1968 and Ramakrishna Rao Burgula first posthumous tribute was congratulated in 1981. He was honored with 'Praja Kavi' title.The Telangana government honored kaloji birthday September 9 as Telangana Language Day


He was conferred an honorary doctorate by Kakatiya University, Warangal in 1992 for his contributions in the field of literature. 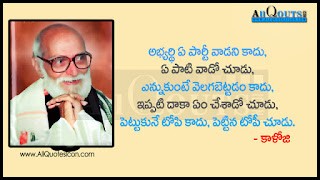 Prajakavi is the single title that captures the richness and variety of Kaloji Narayan Rao’ s qualities. A man of the people, a poet of the people. His choice of language, form and subject matter, his very practice of poetry have been integral to his commitment to the cause of ordinary people. His personal integrity and fearless commitment to justice and truth have drawn around him a wide circle of admirers from every walk of life, form part of his unique personality. His abiding sense of humour, his irony and his brutal insistence on honesty. Kaloji’s fierce individualism and his refusal to submit to imposed discplines have kept him out of the membership of political parties. Yet he is deeply political and has been in the vanguard of many a protest and struggle.

He began writing poetry since his early school days. He composed his first poem in 1931 while still in his teens, react emotionally to the execution of Bhagat Singh and soon became a prominent writer and
voracious reader.

The first modern Telugu poet to write free verse, in this part of the country, Kaloji’s poetry (consisting of ten volumes) is a running commentary on the historical, socio political and cultural aspects of his time. Titled Na Godava it provides profound insights into the myriad issues and contradictions of his time his autobigraphical writing Idee Na Godava is historical and reflective. 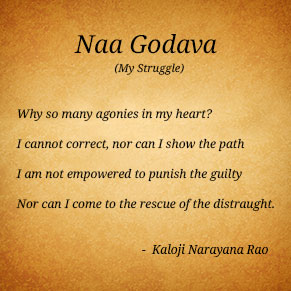 Na Godava, a collection of his poems in eight volumes, stories and translations. Na Kaloji of Godava is unique both in style and content. The great Telugu poet Sri Dasaradhi called it "a commentary on contemporary history." This is essentially the poetry of dissent and eloquent testimony to his concern for reform and the courage to rebel. His other notable literary works are 'Kaloji Kathalu', 'Vijayam Thudi Manadi Jayam', 'Vyavam Parthiva' and 'Telangana Udyama Kavithalu', and translations, entitled "Na Bharata Desha Yatra ' and ' Jeevana Gita '. He also wrote extensively in Marathi, English, Urdu and Hindi. He also translated many literary works from other languages ​​into Telugu.

He claims no copyright and casts his ideas aboard freely for all to use. Kaloji has been at the forefront of all the significant struggles that make up the history of the erstwhile Hyderabad State.He was part of Satyagraha movement, the Osmania University Student Vandemataram movement, Arya Samaj, State Congress, Andhra Mahasabha(Telenagana) and Anti-Razakar movements. He has consistently fought for democratic and responsible government. His commitment to human rights made him an active member of the Tarkunde Committee. Although opposed to power and the trapping of office Kaloji looked upon elections as a democratic exercise. He contested thrice and once got elected as a member of the legeslative council. His most significant contest was in 1977 against Vengal Rao then Chief Minister who symbolised the ’emergency’ rule in Andhra Pradesh.

A voracious reader, an ardent cricket fan and an incurable storteller Kaloji delights his listeners young and old alike with his stories and experiences. His face – familiar all across the State, his presence – welcome everywhere and his honesty that brooks no deceit make Kaloji an institution in his lifetime. And he is rooted in Telengana – his conduct, his language, his humour and his taste reflect these roots.

Kaloji donated his body to Kakatiya Medical College after his death that inspired thousands of people to selfless service.