September 05, 2022
Bidriware is a renowned metal handicraft that derives its name from Bidar, presently in Karnataka. It was believed to have originated in 14th century AD during the reign of Bahamani Sultans. 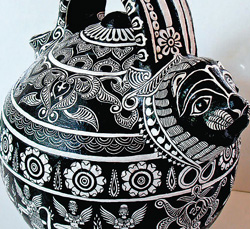 the region of Bidar. The Bahamani sultans had ruled Bidar in the 14th–15th centuries. Bidriware was first practised in ancient Persia and then it was brought to India by Khwaja Moinuddin Chisti’s followers. The art form developed due to a mix of Persian and Arabic cultures and after the fusion with local style, a new and unique style of its own was created. The Nizam of Hyderabad introduced the art form in Aurangabad, which was part of Nizam’s Hyderabad state before 1947.

Bidriware is an eight-stage process. Those are moulding, smoothening by file and the process of designing by chisels. It is then followed by engraving using chisel and hammer where pure silver inlaying is done. It is subjected to smoothening again, followed by buffing and finally oxidising by making use of soil and ammonium chloride. Bidriware is therefore manufactured from an alloy of copper and zinc metals, in the ratio 1:16 by means of casting.

Initially the presence of zinc ushers alloy a deep black color. Firstly, a mould is created using soil and this is made malleable by adding castor oil and resin. The molten metal is later poured to create a cast piece followed by smoothened through filing. The casting is further coated with a strong copper sulphate solution to gain a temporary black coating. Then the designs are etched freehand over this using a metal stylus.This is eventually secured in a vise and the Bidri craftsmen make use of small chisels to engrave the designs over this freehand etching. Fine wire or even flattened strips of pure silver are clearly hammered into the grooves.The item is then filed and buffed, as well as smoothed to remove the temporary black coating. This results in a silver inlay that is not that clearly distinguishable compared to the gleaming metallic surface, which is now completely silvery white.

The Bidriware item is now completely set for a final blackening process. Here, makers use a special variety of soil that is available only in select places. This is mixed with ammonium chloride and water for producing a paste. The mixture is further rubbed onto a heated Bidri surface that darkens the body without affecting the silver inlay.The paste is clearly rinsed, revealing a shiny silver design looking stunning and resplendent against the rest of black surface. The oil is applied as a finishing touch for the product to strengthen the matt coating. The finished product is now shining black with a brilliant silver inlay.

The makers of Bidriware create designs like flowers, leaves and also geometric designs, stylized poppy plants, human figures etc. In some countries there is a great demand for the design of Persian roses and also the passages from the Holy Quran in the Arabic script.Bidriware was also used for making paanholders, hookahs, and vases as well as bowls, ornament boxes, earrings, trays and other jewelry and showpiece items.

The world famous artistic metallic Work which was on a decline few decades ago is currently on the revival path following the introduction of several innovative designs and new patterns.The designs represent Indian to international themes in tune with latest home and lifestyle needs and interior spaces. Bidar in Karnataka state and Hyderabad in Telangana are the popular centres for Bidriware in India and it is also practised in some of the other centres across India. Due to the striking inlay artWorks, Bidriware is considered an important export handicraft item from India’s handicraft market and seen as a prized symbol of wealth. This native art form has also gained the Geographical Indications (GI) registry.