February 20, 2014
Kandur Cholas (1080 AD - 1260 AD) ruled parts of Mahabubnagar (Jadcharla and Acchampet taluks) and Nalgonda (Nalgonda and Miryalguda taluks) districts with Kanduru, Panugallu and Vardhamanpura as their capitals.
These kings are described that they were belongs to Karikala chola family.


The region of Kandurunadu located south of the Kakatiya territory formed the yuvaraja-vritti or kumara-vritti (royal appanage) of Kumara Tailapa, the younger brother of the Chalukya king Somesvara III. It appears that Kumara Tailapa was active in the region even during the reign of his father, King Vikramaditya, as Tailapa's earliest inscriptions in Kandurunadu date to 1110 C.E. In addition to Kandurunadu, Kumara Tailapa also held the province of Sindavadi, with its capital at Tumbalam (near Adoni).
It seems that Tailapa distributed the governorship of Kandurunadu between two brothers of the Choda family, Bhima III (who held Kanduru) and Gokarna I (who held Panugallu).
Prince Tailapa eventually sought to become independent of his elder brother. While Bhima III agreed to fight for Tailapa, Gokarna I remained loyal to King Somesvara. As a result, it seems that Gokarna was killed by Kumara Tailapa and Bhima III in 1128.
Prola II, at the behest of King Somesvara, invaded Kandurunadu to put an end to the rebellion. Prola attacked the general Govinda-damdesa, who had received Panugallu from Kumara Tailapa after Gokarna was killed. Upon defeating and killing Govinda-damdesa, Prola restored Panugallu to Udaya Choda, the son of Gokarna. Prola's campaign into Panugallu seems to have occurred sometime between 1128 and 1136.
Panagallu, Kandur, Ghanapuram, Gangapuram, Vardhamanapuram, Amrabad, Rachur, Kodur, Maghatala (Makthal), Vangur, Munnanur are having the forts in various places of this district and protected the kingdom.
Karikala

Granted the lordship of Cheraku together with its 12 villages to Cheraku Chief Kata I.

The Chalukyan emperor, Someswara-11 (1068 - 1076)  who ruled over the district. The Kolanupaka inscriptions dated A.D. 1070 and A.D. 1075 respectively. These inscriptions are interesting, for the former mentions a’ reddimanya’ probably a service endowment granted to reddy, who was a village officer, while the letter refers to a levy called settisumka meaning “a mercantile tax”.
Subordinate to Western Chalukya King Vikramaditya VI (1076 - 1126). It is likely that Bhima Choda II fought beside Vikramaditya VI in a civil battle with this brother Somesvara II (1068 - 1076) and obtained Kandurnadu region for his services.

An inscription found at Nagai dated 1058 AD, Ayyarasa of Haihaya family was ruling Kandurnadu under Somesvara I.

The anumala inscription dated 1217-18 refers to Gokarnachoda I as the subordinate of Western Chalukya king Somesvara III (1126 - 1138) , probably ruling on behalf of Sridevi Tondya son of Udayachoda I.

1105 - 1157 : Bhimachoda III
It appears that Bhimachoda III, armed with material and moral support of Kumara Tailapa, killed his younger brother Gokarnachoda I.

None of the records on or after 1157 dated in Chalukya Vikram year. Thus, Kakatiya Rudradeva launched an expedition against Telugu Choda chiefs between 1157 and 1162. In this expedition rudradeva attacked Vardhamanapuram and drove Bhimachoda III along with his followers to forest.

Sirikonda inscription dated A.D.1149 states that, Mahamandalika ketaya of the Pallava lineage obtained kondapallinadu by means of charter from Mahamandaleshwar Koduru Udayana Choda maharaja who was ruling Sirikonda-rajya, made the gift of lands and tolls on various articles of merchandise to the Gods namely adjusted in to the God’s hundi.

Kata, Mara and two Erras, the cheraku chiefs assisted Kakatiya Rudra in defeating Udayachoda II who made peace by giving his daughter Padma in marriage to Kaktiya Rudradeva.

1224 AD : Gona Ganapayya Son of Gona Budha Reddi obtained by the grace of Ganapatideva, the Kandur-nadu which he was ruling from Vardhamanapura.

Kayastha Chief Ganagaya Sahini was ruling the region extending from Panugallu in Nalgonda District to Valluru in the Cuddapah district. 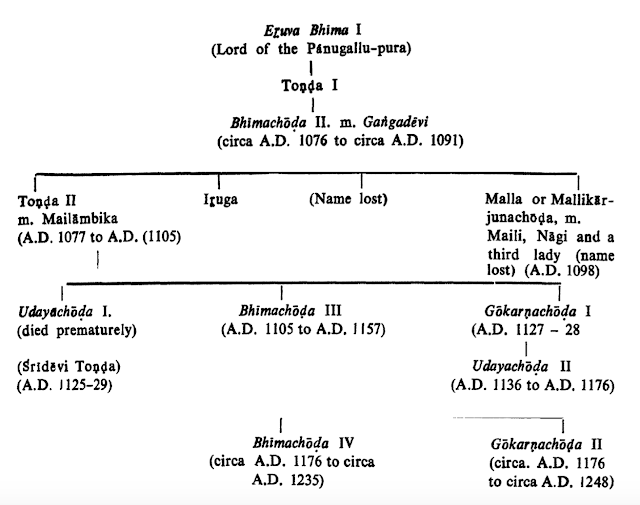