January 20, 2014
700 BC - 300 BC : Assaka was a region of ancient India came after Megalithic (Iron or Metal Age). It was one of the shodasa (sixteen) mahajanapadas in the 6th century BCE, mentioned in the Buddhist text Anguttara Nikaya.

"Assaka" (Prakrit) or "Asmaka" (Sanskrit) signifies "stony region" and was located in the Deccan region.

In the Vayu Purana (88. 177-178) Asmaka and Mulaka appear as scions of the Ikshvaku family. This probably indicates that the Asmaka and Mulaka (or Alakas) kingdoms were believed to have been founded by Ikshvaku chiefs, just as Vidarbha and Dandaka were founded by princes of the Yadu (Bhoja) family. 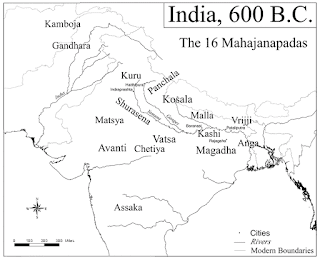 We learn from the Assaka Jataka (No. 207) that at one time the city of Potali was included in the kingdom of Kasi, and its prince Assaka was presumably a vassal of the Kasi monarch.

The country of Assaka or the Asmaka was located in Dakshinapatha or Southern India. In buddha’s time, Assaka was located on the bank of the river Godavari (South of Vindhyan range). The Capital of the Assaka was Potana or Potali which corresponds to Paudanya of Mahabharata.

Paithan (Maharashtra) used to be the capital of Mulaka (Alaka).
Evidently, Assaka and Kalinga regions were once contiguous.The Godavari River separated the country of the Assakas from the mulakas.

The Assaka Janapada evidently covered considerable part of the Telangana. The reference to Asmaka Janapada, part of present Telangana, as one of the 16 Janapadas in ancient India proves that there exist​ed an advanced stage of society.

In early Pali literature Assaka has, on the one hand, been distinguished from Mulaka which lay to its north, and on the other from Kalinga. He suggests that in later times Assaka seems to have included Mulaka, and also perhaps Kalinga. In the Sona-Nanda Jataka we find Assaka associated with Avanti; this association can only be explained if we summarize that Assaka included at that time Mulaka and thus its territory abutted on Avanti.

The Chulla Kalinga Jataka mentions a king of Assaka named Aruna and his minister Nandisena, and refers to a victory which they won over the king of Kalinga reigning ever the city of Dantapura in Kalinga country.

In the sixth Century BC at the time of lord Mahavira, the ruler of Assaka whose son was a prince Sujatha.

The Sutta Nipata, an early Buddhist work relates the episode of sixteen disciples of Bavari, a hermit living in Assaka Janapada, who after meeting the Buddha at Rajagriha took refuge in the Dhamma.

Assaka represents the Sanskrit Asmaka or Asvaka, which is mentioned by Asanga in his Sutra-lankaraas a country in the basin of the Indus. Asanga's Asmaka seems therefore to be identical with the kingdom Assakenus of the Greek writers, which lay to the east of the Sarasvati at a distance of about 25 miles from the sea on the Swat Valley.

Videha, Kuru, Panchala, Trigarta, Asmaka, Sursena, were all annexed into Magadha by Mahapadma Nanda (345 - 329) and recieved the title of "Destroyer of Kshatriyas" when he founded the Nanda Dynasty.
Assaka
Brahmadatta
Sujatha
Aruna