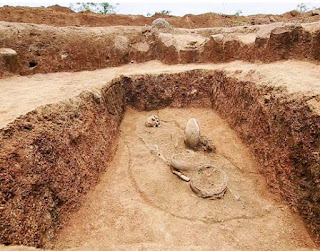 2200 BC - 700 BC : Megalithic (Iron or Metal Age) came after Neolithic (New Stone Age) . Iron Age may have come into existence in Telangana much before the rest of the world. At least that's the conclusion reached by archaeologists excavating the University of Hyderabad campus who found iron artifacts dating back to roughly 2,200 BC.
The team of archaeologists, led by professor KP Rao, has found several artefacts, including small knives and blades besides earthen pots. "The implements that were found were tested at the National Geophysical Research Institute (NGRI) using a method called Optically Simulated Luminescence (OSL). The metal objects were dated to anywhere between 1800 BC and 2,400 BC. So we are assuming they were made during 2200 BC," Prof KP Rao told TOI.

A megalith is a large, often undressed stone, that has been used in the construction of various types of Neolithic, Chalcolithic or Bronze Age monuments, during the period 4500-1000 BCE. Also known as petroforms, these monuments can consist of just one stone (Menhir), most megalithic monuments consist of a number of stones, which are fitted together without the use of mortar or cement.

Megaliths are a special class of Monuments in Deccan particularly in Telangana State. Almost all types of megalithic monuments like menhirs, stone circles, dolmens and dolmonoid cists are reported in hundreds of villages in all Telangana Districts. Discovery of cruciform monoliths in male and female forms known as Statue-Menhirs on the Mallugrugutta (Warangal) Galabha, Kachanapally (Khammam) is a unique feature in the megalithic culture of the mid-Godavari valley. The Megalithic monuments located in Telangana are usually dated anywhere between 1000 B.C and 200 A.D.

At Pullur Banda village (18°10'34"N 78°48'41"E), Siddipet Mandal, Medak district, there are nearly 50 Megalithic burials located. These are classified into three types viz., Menhir, Cairns and Dolmens. With a view to understand the culture and traditions of the Megalithic communities of this region two burials are selected for excavation.
Menhir

This is a huge (nearly 5.4 mts. ht) vertical stone kept to the north of the big burial (burial No. 1). Bruising is seen on its back side in the centre. These bruisings are stick type human forms with weapons in their hands. At the foundations of the Menhir, a trench is laid and excavated upto 15 cms.
Cairn (Megalithic burial No.1)

This burial is located to the southern side of Menhir. This is the biggest one having a diameter of 10 X 10 mts., with fifteen boulders in circular shape with a huge capstone (weighing nearly 7 to 8 tonnes) broken into three pieces which are arranged in triangular shape. The capstone was lifted carefully with the help of crane without damaging the deposit of the burial, as it is impossible to lift manually and excavation was continued on scientific lines. During the excavation iron implements such as Dagger, Arrowheads, iron forecep, Knife, Javelin, black and red ware, black ware and red ware pottery, a small broken ring made of clay etc. were recovered. At a depth of 1.85 mts. in the centre of the pit bones were reported in a broken pot on bedrock. Most probably these bones seems to be part of the skull.
Cairn (Megalithic burial No.2)

This burial is located 30 mts. west of Menhir. It consists of 14 boulders in a circular shape in 8X8mts.diameter. This is also a pit burial having huge capstone. After carefully lifting capstone the excavation continued. In this burial black and red ware, red ware and black ware pottery were reported. At a depth of 1.5 mts., remains of bones are also reported in a damaged pot.

From the above evidence i.e., recovery of bone pieces in the pots in centre of the pits, it shows that these are secondary type of burials.

The excavation continued for another 10 days to know more cultural evidence of the site. The bone pieces and related material were sent to the Indian Institute Chemical Technology for K14 test to decide the dating of the material.

The Government is making all efforts to retrieve and preserve the Megalithic Burials wherever it is found, apart from its regular exploration and identification.

A rare Megalithic cist burial (Gudu samadhi) belonging between 1000 BCE and 600 CE has been found in a farm at Dasaram village, located close to Musi river in Nereducherla mandal in Nalgonda district.

DOLMENS : GONDIMALLA - Mahaboobnagar
There are about 20 to 25 dolmens in the complex with intervening space of 10 to 15 m. Dry masonry walls were constructed by piling-up of flat cut slabs, about 40 cm. wide and 80 cm. long and 15 cm. thick. The roof was covered by a roughly circular or rectangular granite slab with a thickness of 15 to 20 cm. The height of the walls below the roof slab never exceeded 1 m. The plan of the room, enclosed by the wall, is sometimes apsidal and sometimes roughly rectangular. Outside the walls a filling of Cairn or small rubble was packed upto the roofing slab to make the room cosy and for protection from reptiles, etc. A single entrance, always facing north, with an average width of 60 to 80 cm. has a threshold slab of about 10 cm. higher than outside ' surface as if to obstruct reptiles entering the room. It is rather difficult to assign these dolmens to any particular period. The flooring, consisting of bed-rock, is without any possibility of
excavation.

PEDDAMARUR
Peddamarur 27 is a small village in the Kolhapur taluk of Mahboobnagar district and situated on the left bank of river Krishna. As the village and its surroundings come under submergence on completion of the Srisailam Hydro-Electric Project, major excavations have been conducted in the year 1977-79. The habitation site of the proto and early historical period, about 10 hectares in extent, lies on the south- west of the village and roughly half a kilometre away. Two groups of Megalithic burials are also found at Peddamarur; the first one towards north of the village, about a kilometre away, and the second about 3 kilometres south-west of the village and near river Krishna. Excavations were concentrated at the second group of the Megalithic burials and over the habitation site.

Archaeology and Museums Department did not list them under the protected monuments list. Eight types of megalithic burial sites – Stone Circles, Dolemens, Avenues, Cairns, Menhirs, Cromleches, Cruciform, and Pit Burial – were found in Telangana earlier , but currently, only stone circles are found while the rest are found very rarely.

Menhirs locatedin Guntupalli village of Chandampet mandal, Pazzur village of Thipparthy mandal, Kacharajupalli and Ramachandrapuram villages located near Bhongir town are not listed under the Act. Avenues are found at Janakipuram village and Dolemens in Atchampet area in Mahabubnagar district. In Khammam district, Dolemens are found in Padukonigudem of Gundala mandal, Peddarakasi and Chinnarakasi villages of Pinapaka mandal, Jubeda village of Thirmalayapalem mandal, and Thogudem village of Palvancha. Stone circles at found in Berolu villages of Warangal district. Neither of them are listed under the Act. Speaking to The Hindu , historian D. Surya Kumar urged the State government to list all these burial sites as protected monuments, apart from conducting a survey across Telanagana to identify whatever the megalithic burials were present. He urged the government to construct a boundary wall or fencing around them to protect them, for future generations to see.

Iron Objects from Megalithic burials
In South India iron objects constitute, besides pottery, one of the
important features of the Megalithic burials. The repertoire of iron objects found in the Megaliths displays a wide variety pertaining to the house- hold, agriculture, and war. They include daggers, knives, wedge-shaped blades, lances or javelins, spear -heads often with barbs on one or both sides, arrow-heads both socketed and tanged and swords of single or double edge. Besides, there are objects of house-hold utility and agricultural implements such as flat-axes, often with ring fasteners, hatchets, chisels, tripods to support pointed based vessels, lamps, hooks, knives, sickles, bill-hooks, spades, hanging saucer lamps, rods with rounded heads, resembling the beams of weighing scales, hoe-blades, horse-bits, ferrules,
bangles, nails, frying pans (sthali), ladles with long handle and bells, etc.

Next comes Assaka or Asmaka Janapada