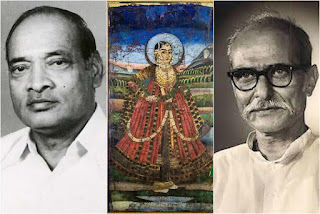 Around 12th and 13th Century

This book gives information about economic conditions existing in Telangana around 12th century.

It gives us the history of Induluri chiefs who served the Kakatiyas from Ganapatideva (1199 - 1262 AD) period.

Jaya Senapathi
Nrittaratnavali: This is a work in Sanskrit written by Jaya Senapathi the general and minister of Ganapatideva (1199 - 1262 AD). It is a lakshana grantha on dance and dramaturgy. The principles of various styles of nritta and natya are described in it.

It is helpful in understanding the art of dance in Telangana during 1199 - 1262 AD period.

The king, ministers, forts, defense of the kingdom, anarchy, evils of unloyal servants and general ethics are some of the topics discussed.

This book gives some religious perspective during that period.

Basava Purana is a 13th-century Telugu epic poem. It was written by Palkuriki Somanatha. It is a sacred text of Lingayat. The epic poem narrates the life story of philosopher and social reformer Basava (1134–1196 CE), the founder of Lingayatism.

Vidyanadha (Agastya Pandita)
Prataparudriyam or Prataparudra Yasobhushanam : Sanskrit poet and rhetorician of the court of Kakatiya Prataparudra II of Warangal (1289-1323). A commentary on this book was written by Kolachala Kumaraswami son of the renowed commentrator Kolachala Malliratha Suri.

This books gives some historical perspective of Kakatiya Period.


Around 14th and 15th Century
Gona Budha Reddy
Ranganatha Ramayanam was a pioneering work in the Telugu language written by Gona Budha Reddy on the theme of the Ramayana epic. Most scholars believe he wrote it between 1300 and 1310 A.D., possibly with help from his family.

Mallinatha Suri
Commentaries on five mahakavyas (great compositions) of Sanskrit: Mallinatha Suri was an eminent criticsaid to have received the titles of Mahamahopadyaya and Vyakhyana Chakravarti. He lived during the reigns of Racakonda king Singabhupala and Vijayanagara king Deva Raya I. Based on the evidence from the inscriptions, it is estimated that he lived between 1350-1450 AD.

Mallinatha is well known as a commentator who has written glosses on Classical epics of Sanskrit, besides his commentaries on Śātric works. His Sanjivani commentary on Meghasandesa is the most popular one. He is also known as a poet, the fact which is rather unknown, though the names of his creative compositions are known to the scholars of Sanskrit literature.

Vinukonda Vallabharaya
Kridabhiramamu: Telugu book in about 300 verses. Some scholars attribute it to Vinukonda Vallabharaya and some other to famous poet Srinatha both belonging to 14 - 15th century. The subject matter of this book is the conversation between two friends Manchanna Sarma and Tittabhasetti about various topics which they come across while wandering the capital of Orugallu.

This book gives some information about urban life during Kaktiya Period.

Muhammed Quli Qutub Shah had the distinction of being the first Saheb-e-dewan Urdu poet and is credited with introducing a new sensibility into prevailing genres of Persian/Urdu poetry.

Ekamranatha
Pratapa charithra: This is a work in Telugu prose written by Ekamranatha during 16th century.

Around 17h Century
Sarvappa
Siddeshvara charitra: This is Telugu dvipada type of verse written by Sarvappa of the 17th century.


Futush-us-Salatin of Isami, a contemporary of Mahammad bin Tughluq narrates the tale of how Prataparudra was defeated by Muslim armies.

She was wealthy, highly knowledgeable and much sought after by poets from all over the country. She was fluent in Urdu, Persian, Bhojpuri, Hindi and Telugu.

She is credited to be the first female poet to compile a proper Diwan of poems, that too utilizing the sweet Daccani Urdu language spoken in the Hyderabad regions.

Several research scholars are of the opinion that her life and times influenced the famous writer Mirza Hadi Ruzwa while writing this story about ‘Umrao Jaan Ada’. Chanda was a great devotee of the Sufi saint Maula Ali whose shrine is on top of a hill in the area Maula Ali in Hyderabad. She wished to be buried at the foot of the same hillock after her demise.

Editor and founder of Golconda Patrika, a journal in Hyderabad State. Pratapaareddy was a scholar in Sanskrit, Telugu, Urdu and English languages. He had tremendous admiration for Telangana Telugu. He is famous for his research articles, novels, poetry, story writer, and literary critic.

Maqdhoom Mohiuddin
Besat E Raqs  isa a collection of poems and ghazals by Maqdhoom Mohiuddin (Feb 4, 1908 – Aug 25, 1969 ) is a freedom fighter, an academic, a romantic poet and a revolutionary in his own right, Maqdhoom continues to be a favourite of every Urdu literature lover. Some of his Ghazals like ‘Ek Chameli Ke Mandwe Tale’ and ‘Phir Chidi Baat’ were tuned and became great hits as film songs in Hindi cinema.

Kaloji Narayana Rao
Na Godava by Kaloji Narayana Rao (Sep 9, 1914 – Nov 13, 2002) is the first modern Telugu poet to write free verse, in this part of the country, Kaloji’s poetry (consisting of ten volumes) is a running commentary on the historical, socio political and cultural aspects of his time.

Na Godava it provides profound insights into the myriad issues and contradictions of his time his autobigraphical writing Idee Na Godava is historical and reflective.


Dr. Biruduraju Rama Raju
Folklore In The New Millennium by Biruduraju Rama Raju (April 16, 1925 - February 8, 2010) was the first PhD scholar from Osmania University in folklore studies. As a national research professor, he was equal to what M S Subbulakshmi was in Carnatic music and Ustad Bismillah Khan was to Hindustani music. In fact, all these three received the National research professorship from the government at the same time.

His numerous papers and literary works on the folklore of Telangana are now the most authentic reference points available to any research scholar.

Dasharathi Krishnamacharyulu
Agnidhaara by Dasharathi Krishnamacharyulu (July 22, 1925 - Nov 5, 1987). This book is about the Telangana Armed Struggle against Nizams rule, in which young Daasarathi served as a revolutionary. Daasartathi wrote part of his book Agnidhara while he was in jail and completed it after his release. Agnidhara book that also contained the famous lines - Na Telangana, Koti Ratnala Veena, which later became inspirational in the separate State Movement.

P.V. Narasimha Rao
A man of many interests, he likes music, cinema and theatre. His special interest lies in Indian philosophy and culture, writing fiction and political commentary, learning languages, writing poems in Telugu and Hindi and keeping abreast of literature in general.

He translated other famous works from Marathi to Telugu and from Telugu to Hindi, and published many articles in different magazines mostly under a pen name.

In his later life he wrote his autobiography, The Insider, which depicts his experiences in politics.

In an effort to bring out forgotten first-generation Telangana authors into limelight, she published a compilation called Tholinaati Kathalu which features stories by writers like Komarraju Venkata Lakshmana Rao and Edire Chenna Keshavalu. The book substantiates the fact that literature of Telangana existed from as early as 1910.

Based on her Telugu University presentation on the topic Vyapara Samskrutilo Stree Chaitanyam, Sujatha Reddy published a book with the same title in 2002. This short story compilation revolves around how women need to don a new avatar to protect their identity, family, and the society in this mechanical age.