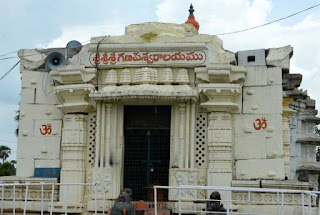 Kusumanchi is a town and Mandal in Khammam district, Telangana, India, which was popularly
known as Krupamani during the Kakatiya period. The Shivalingam in this shrine is one of the largest in Telangana. There is a 15 ft high idol of Lord Venu Gopala Swamy on the southern side of the temple.

After being neglected for decades, the historical Siva temples of Kakatiya era in Kusumanchi mandal headquarters are set to undergo renovation.

Sri Ganapeshwaralayam and Mukkanteswaralayam, the two Siva temples built by Kakatiya rulers during 12th and 3th centuries in Kusumanchi stand testimony to the architectural acumen of the great Kakatiya kings.

The historical shrines resemble the famous Ghanpur and Ramappa temples of Kakatiya period in Bhupalpalli district. Although declared as protected monuments by the Department of Archaeology several decades ago, the Mukkanteswaralayam situated near Ganapeshwaralayam continue to lie in utter neglect.

Thanks to the patronage of some devotees and heritage conscious persons, the daily rituals are being held without any interruption at Ganapeshwaralayam. This particular temple attracts devotees from far off places in Warangal, Nalgonda and other neighbouring districts during Sivaratri festivities every year.

A group of philanthropists including Venkatapratap Reddy, a retired police officer, initiated several development works at Ganapeshwara temple in the last couple of years.

Scores of devotees throng the temple during Sravanamasam and other auspicious occasions more particularly during the Sivaratri jatara here, says Devulapalli Seshagiri Sarma, the priest of Ganapeshwara shrine. There is a dire necessity for a kalyana mandapam on the premises of the temple to perform special rituals and also provide seating arrangements for devotees during celebration of festivities, says Mr Sarma.

The government has released Rs. 30 lakh each for Ganapeshwaralayam and Mukkanteshwaralayam for renovation and development more than a month ago, says Rangacharyulu, consultant, Department of Archaeology.

A detailed project report has been finalised to lay a pathway between the two historical shrines and take up renovation works such as strengthening the foundations including platform and other structures of the temples, he says.