Sri Lakshmi Narasimha Swamy Temple is located at Jankampet in Nizamabad District of Telangana.
is dedicated to Lord Narasimha an incarnation of Lord Vishnu. This Temple consists of a pillared hall and garbhagriha. This temple is famous for Astahmuki Puskharini on top of the hill, constructed in octagonal shape. 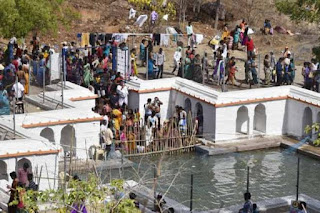 The temple was built during the Rastrakuta times and renovated during the period of Western Chalukyas, Kakatiyas and later rulers.

Whenever Amavasya falls on a Saturday ‘Shaniwar Amavasya’, people from Nizamabad and surrounding areas take a dip in the Lakshmi Narasimha Swamy temple Ashtamukhi ‘Koneru’ here and offer prayers. Devotees believe that by performing this ritual, they can keep away ‘Shani Dosham’.

In addition, a large number of people from Hyderabad, Maharashtra, and Karnataka were among those who took a dip in the ancient temple’s koneru.