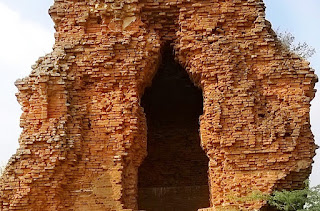 faith which retained architectural features and stucco decorations. The stucco figurines discovered in the excavations exhibit the continuation of the lime plastic Art of Amaravathi School. The temple has been a subject of study, due to its unique architectural elements, which is not that prominent in other Jain sites.

The excavations nearby the settlement at Gollathagudiby the Archaeology team has brought to light many Jainism vestiges besides the remnants of a Hindu Temple, belonging to early medieval times. Jainism sculptures like Mahaveera, Parsvanatha and other objects found here, have been shifted to the District Museum, Pillalamarri, Mahabubnagar as well as the State Museum in Public Gardens, Hyderabad for preservation.

The oldest Jain temple built with bricks and in terracotta style lies in shambles.

According to the officials of Department of Archaeology and Museums, there are only two such structures now in the country. One is the oldest Hindu Temple built during Gupta period is located at Bhitargaon under Kanpur district in Uttar Pradesh. The second one is located in Telangana which was built between 7th and 8th century.

The temple, which was damaged around 18th century, has been remained exposed to vagaries of the nature. “This had resulted in the only remaining Jain brick temple suffering major damage as no efforts were being made to conserve it, besides it was left with no maintenance to protect it from further deterioration,” the sources pointed out.

Alvanpalli (Gollathagudi) village is located about 10 km from Jadcherlatown and nearly 30 km from the district headquarters of Mahabubnagar. It is well accessible by road.