The temple is unique in more ways, it is a Ram temple but there is no Hanuman inside the sanctum 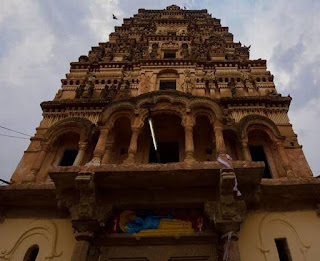 sanctorum, instead there is a Hanuman at the base of the dhwaja stambh (flag post) looking towards the temple. It is believed that Hanuman is looking towards Lord Rama to wait for instructions from him to fulfil the desires of the devotees. There is another Hanuman idol that looks directly outside at the bottom of the second flag post. This was a unique thing for me was the presence of two dhawaja Stambhs in the temple courtyard one seems to be old and other recently added (recent here could mean 100+ years). The 3 idols of Rama, Sita and Lakshaman are made from a single stone and not made from separate rocks.

The Rama temple was built by Vengi kings in 13th century but the idol was 1000 years old. The temple is adorned with a large seven-story tower which is quite famous among Telugu movie fans. There is a large image of Lord Vishnu is sleeping posture above the gateway of the tower.

“There are no inscriptions of this temple but legend has it that it was built during the time of Kalyani Chalukyas,” says Anvesh Sharma, the temple priest.

There is a large temple pond which is very ancient. The pond is surrounded by porticos and once it provided shelter to the pilgrims. The surroundings of the pond are filled with coconut trees. There is a mandapa opposite to the temple.

Sri Rama Navami is celebrated with great passion at this temple every year (Apr).

The gali gopuram is a magnificient work of art that rises some 80 feet into the air. Though it is similar to other gali gopurams in South India like Hampi and Tirupati, the one at Ammapalli is leaner and is a combination of limestone plaster, baked bricks and stucco giving it a more dramatic appearance. Surprisingly, the multi-storied gopuram also incorporates elements of Rajasthani architecture such as the flared chajjas that curve upwards. “The gali gopuram and the walking path around the temple are later day additions. They were built in the 17th century while the inner sanctum sanctorum is the earliest structure,” says the priest.

It is the sanctum sanctorum with the three idols of Sita, Rama and Lakshmana that the story of the temple unravels. “This is carved out of a single stone. Even the deities of Rama, Sita and Lakshmana have makarathorana (the arch above the idol) carved out of the single piece of rock. The unique aspect of this Rama’s idol is that the makarathorana has small idols which are representative of Dasavataram,” informs the priest. The gopuram over the idols is a smaller structure but with greater detailing of the temple iconography which is intact despite its age.

While most villages have Rama temples with Hanuman kneeling in front in an act of prayer, the Ammapalli temple has an idol of Kodandarama where Rama holds the arrow in his right hand and a bow in the left. “There are very few Kodandarama temples as they are built only in places where Sri Rama travelled or stayed during his 14 years of exile. That is also the reason the temple doesn’t have Hanuman sitting near the three as he didn’t join them till the end of exile,” says Sharma.

Spread over nine acres, the temple and its ancillary structures hark back to a time when land was not at a premium. It has a step well that sprawls over an acre of land and has a walkway around it. Unfortunately, the well is dry as a rock. “Earlier the well used to be full of water through the year. But now due to a lot of construction activity, the natural pathways of water have been disturbed and the well dries up on a regular basis,” says Anuradha Reddy of Intach who has a family ties to the trustees of the temple belonging to Rajapet Samasthan.

How to reach Shri Rama Chandra Swamy Temple Ammapalli Village: If you are coming from ORR take exit 17 and travel on service road till you meet the underpass that takes you on Rallaguda Road towards Narkhoda, Ammapalli village will be on the way and you will see a big Arch on the main road informing about the temple.

If you are coming from Banjara Hill/Mehdipattnam side come from the PV Narsimha Rao Expresswayand then follow this map to join the same route after you reach the Shamshabad village. Here is a Google map to reach the Ammapalley temple from Shilparamam you can expand it and change your starting point.