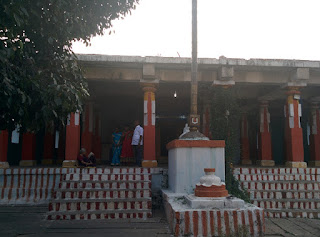 On the name of the god varadaraj swamy the village is designated. To the village premises hanuman temple is located.

Every year in the month of may a famous festive ''jatara'' in the name of god varadaraj swamy will be taken place.on day of vyshaka pouranami" celebration are carried in huge way.

According to sources temple was built in 1356a.d, four fathers of present chairaman family developed this historic place, they were carring varadaraja swamy idol from vishnu kanchi(kanchipurm,T.N) to their native raygadh. at that they were resting for night, in dreams lord vardaraja swamy told them built temple here only but he thought this place is not suitable hence vardaraja swamy is their homeidol, he wanted place it their own place(raygadh). next morning their journey started but axle of thier cart was broken it took whole day to repair ,once again lord appear in dreams , he informed to all villager and his follwers but all of them refused to built temple thier itself, they startd journey again sam scene was repeated hence he decided to built temple here itself,

He went nawab of medak for permssion of temple and land for it. he gave a permsion he will the land to temple how many acres that he can run with a burnig coal bowl on his head, succesfully he ranned nearly 1400acres.temple construction was carried for 10 years for every vyshaka pournami yatra is conducted similar to vishnu kanchi(garuda seva) in kanchi (T.N ), from past 6centuris thier heirs were looking after the tmeple needs. recently endowments dept took temple left it to god itself due lack of revenue,

we can see golden lizard and silver iguana's, well was closed recently , inscription of past glorious on walls of temple.presnt temple has 70acres only ,they were occupied by land lord's .

God vardarajswamy will be going throug the village by ratham to hanuman temple located in the premises of village.