Deval Masjid located in Buswatarag Nagar, Bodhan, Nizamabad, as its name signifies  is a 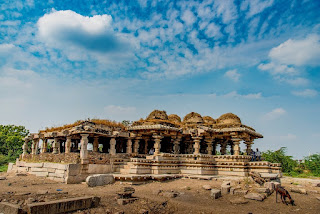 a Jain temple built during the 9th and 10th century by the Rashtrakuta king Indra III.

It was later modified by the Kalyani Chalukya king Someswara. It was he, who named the temple as Indranarayana Swamy Temple.

During the invasion by Muhammad-bin-Tughlaq in the Deccan, this temple was converted into a mosque.  This is a star-shaped building which has undergone no alteration at the hands of conquerors except removal of star chamber and setting up of a pulpit.

The roof has been embellished with domes which are a salient feature of Muslim architecture. Some inscriptions by Muhammad-bin-Tughlaq can also be seen here.

A new mosque is built adjacent to the old mosque, which is now used for prayers.


Though it was great to see the place, the first look was rather disappointing as it was heavily littered and not well kept.

Now that the new mosque has been built, this building has been abandoned and is used by people to sleep peacefully or finish some office work. It would be great if the tourism department takes measures to uplift the condition of the temple as it has good tourism potential.