This temple, dedicated to the Pawan Putra Hanuman, the greatest devotee of Lord Shri Ram is one of the oldest temples in the state capital, Hyderabad. 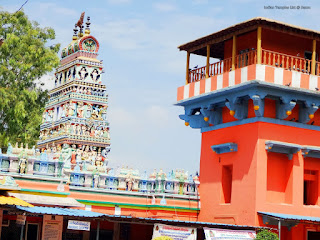 This famous temple in Karmanghat was constructed in the 12th century A.D. according to the legend, when a Kakatiya ruler who was hunting after some time in the forest, felt tired and sat down to take rest under a tree. While resting, the king heard someone chanting the name of Lord Rama, the king got interested and went around trying to find who it was and as he walked further deep into the forest, he discovered an idol of Lord Hanuman. The stone idol was in a sitting posture and the voice was coming from within the vigraham. Having paid his respects, the humble king returned to his capital, and that very night, Lord Hanuman appeared in his dream and asked the king to construct a temple.

The Karmanghat Temple was constructed immediately and the succeeding kings of the Kakatiya dynasty ruled it well. Some 400 years later, Aurangzeb had ordered his armies to each and every corner of the country to destroy all Hindus temples. At this temple, Aurangazeb's mighty armies could not even enter near the compound wall. After learning this, Aurangzeb, himself went there to wipe out the temple with a with a crow bar in his hand. When he reached the temple premises, he heard a deafening roar rumbling and the instrument slipped from his hands as fear overwhelmed him. Then he heard a thundering voice from the heavens saying Mandir todna hai raja, to kar maan ghat" which means, oh king, if you want to destroy this temple, then make your heart strong. The place got its name kar-man-ghat, after the voice from the heavens. And to this day, the main deity Lord Anjaneya sits in the temple peacefully meditating and bestows his blessing to his devotees, as Dhyana Anjaneya Swamy.

It is located at a distance of nearly 12 kms from Mahatma Gandhi bus terminal of Hyderabad and well accessible by road.