April 08, 2017
One of the famous Hindu temples, Sri Anantha Padmanabha Swamy temple is located in the beautiful hilly region of the Ananthagiri hills in Vikarabad district of Telangana, India. This temple situated in Ananthagiri hills is dedicated to the worship of Lord Vishnu. 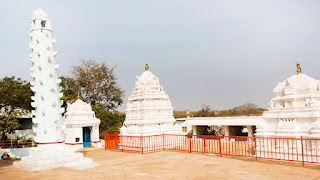 According to Hindu Mythology, Skanda Purana, it is believed that this Sri Anantha Padmanabha Swamy temple was constructed by the rishi Markandeya in the dwapara yuga on Ananthagiri hills.

The rishi Markandeya came here for yoga sadhana every day because the splendid and pleasant atmosphere of Ananthagiri hills attracted him. After his Yoga and meditation, Rishi Markandeya used to go to Kasi to take a holy bath in the river Ganges through a cave. During the dwadasi season, Markandeya couldn't make it to Kasi in the early hours of the day. He was very upset with this and after seeing the rishi's concerns, Lord Vishnu himself appeared in Markandeya's dreams and arranged water from the river Ganges for the rishi's bath. Markandeya was blessed to take a permanent place in the world as a river by lord Krishna who disguised himself as Sri Anantha Padmanabha Swamy.

This river which is now popularly known as the river Moosi flows through Hyderabad. Markandeya initially took dharshanam of Sri Anantha Padmanabha Swamy and converted a charka into Swamy. It is said that for the past four hundred years the Nizam Nawabs visited Ananthagiri hills for its peaceful atmosphere and would rest there.

The main temple of Lord Padmanabha Swamy was built by the Hyderabad Nawab as Sri Anantha Padmanabha Swamy appeared in his dreams and asked him to build a temple for him. This temple is situated in the village of Ananthagiri at a distance of seventy-five kilometers from Hyderabad and five kilometers from Vikarabad. There are regular private transport operators and frequent buses between Vikarabad and Ananthagiri hills.