He is one among the famous Vaggeyakaras (same person being the writer and composer of a song) in the Telugu language, the others being Tyagaraja, Annamayya, Kshetrayya. 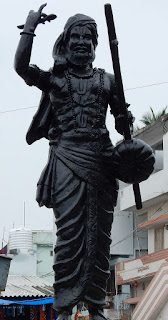 His devotional lyrics to Rama are famous in South Indian classical music as Ramadaasu Keertanalu.

He also wrote Dasarathi Shatakamu with a 'Dasaradhee Karuna payonidhi' a collection of nearly 108 poems dedicated to the Lord Rama son of Dasaratha.

Bhakta Raamadaas, was born Gopanna to Linganna Mantri (a surname he kept as a result of one of his forebears being a minister at the court of a king) & Kadamba (sister of Madanna, a brahmin minister to TaniShah), in 1620 in Nelakondapalli, a small village in  Bhadradri Kothagudem district, Telangana, India.

Since childhood, he imbibed his family's interest in spirituality and composed several keertanas on Rama. His devotion to Vaikunta Rama at the temple of Bhadrachalam, a small village in the middle of the jungle on the northern banks of the holy river Godavari, earned him his name Bhadraacala Raamadaas.

His guru was Raghunatha Bhattacharya.

During the reign of Abdul Hasan Tana Shah, (the nawab of the Qutub Shahi Dynasty at Golconda), Ramadas (Gopanna), thanks to his uncle Madanna, was appointed as a Tahsildar for Palvancha Paragana which included Bhadrachalam, a pretty and picturesquely situated temple town on the Godavari river.

Ramadas was always distracted and his intense love for Lord Rama compelled him to build a temple at Bhadrachalam. He collected money for the construction of temple from the citizens, but was not enough.

So he borrowed from the tax revenue of the nawab and gave his god a worthy abode, vowing to return the money. However, the nawab was furious and sentenced Ramadas to 12 years in prison.

Ramadaas thus earned the name Bandikhana Ramadaas (meaning imprisoned Ramadas). Frustrated at god's indifference to his pleadings, Ramadas composed some of the finest keertanas in his prison cell (reminding Rama of his services in Ikshvaku Kula Tilaka).

It is said that Rama & Lakshmana in the guise of two youngsters paid up his dues and got his release papers.

The golden coins paid by Rama are known as Ram Tanka coins .They can be seen even today. These coins have the Pattabhishekam scene on one side and the picture of another Rama Bhaktha, Hanuman, on the other side.

The nawab was moved and recognized the greatness of Ramadas and released him immediately and gave him land around Bhadraachalam to continue his dedicated service to Bhadraachala Raama.

Other compositions are positive invocations, favored by traveling minstrels, including the Tondaiman rulers of Pudukottai in Tamil Nadu, who popularized his songs.

Among his other accomplishments is the creation of the whole Ramayana story in the form of a prose-poem, a Choornika.

THE TEMPLE OF BHADRACHALAM : Ramadas, who renovated the holy shrine on the hillock near by the banks of river Godavari. It has gained great importance all over the Nizam State. The Tanisha endowed properties for its maintenance. An annual cash grant of Rs. 20,000 was made by him. That the temple was not conspicuous one till the Ramadas undertook its improvement and organize of regular Poojas and festivals is evidence by several authorities.

In the list of ancient Hindu temples which are the principal sacred ones consecrated to Vishnu and which are daily repeated by Vaishnavaite Hindus, Bhadrachalam does not find place. None of the Alwars visited it. Among the 108 Divya Kshetrams of Lord Vishnu which were hailed by the Alwars, Bhadrachalam is not included a few like Ahobilam and Tirupathi only located in Andhra.

In 1687 A.D. Aurangazeb and his son Azam seized the fort of Golkonda. The entire region came under the Moghal rule in 1726 A.D. “Thanisha ” invaded Bhadrachalam temple and town, looted its pious and peaceful citizens and plundered the holy shrine. Sensing before hand the invasion, the priests of the temple removed the idols to a safer place by boats. Sri Rama with his consort and brother had to remain in exile in Veerabhadra’s temple at a Island called Pattiseema in West Godavari District about 23 KMs from Rajahmundry. If symbolizes the unity of Hindus at that time.

After a temporary stay for about five years at Pattiseema the idols returned to Bhadrachalam, his permanent abode, with the help of Pusapati Vijayasyama Raju and Sitarama Raju of Vijayanagaram.

Some time Ramadas ascended to Vaikumtam (Ramadas of Bhadrachalam had the unique luck of flying to Vaikuntam with his mortal body afterfulfiling his mission on earth), “Tumu Narasimhadas” of Guntur went to Bhadrachalam with Varada Ramadas of Kanchipuram. Both are stayed there for some time. The original Ramadas constructed or renovated temple and endowing properties Thanisha4 to Ramadas for the maintenance of the shrine for continuous worship of deities was by then destroyed. Narsimhadas met the Nizam who was the successor of Tanisha and got the finance to renowned the temple.

About the three hundred years after Ramadas renovated the shrine and constructed Gopurams and again renovated in the last years of 20th Century main sanctum removed Vimana Constructed on it. Kalyana Mandapam (where the Seetharama Kalyanam performing every year on Sri Rama Navami day) constructed.

The construction of a bridge over the Godavari river near Bhadrachalam with good transportation facilities the temple has acquired new dimensions. The holy shrine is popular all over the world today as “Sri Seetha Rama Chandraswamy Devasthanam” An icon of great saint Bhakta Ramadas has been installed on the temple premises.

THE GURU OF RAMADAS: The popular belief is that Ramadas received initiation from the famous North Indian Saint “Kabir”. When Kabir sought admission into the shrine at Bhadrachalam, is said that he was prevented from entering the Hindu Brahmins, he is being a Muslim.

In his “Dasarathi Shathakam” Ramadas describing himself as “Gopa Kaveendrudu” states that he had sought refuge in the feet of “Bhattararya Guru’s . He cleared that Raghunatha Bhattar was his Guru. In his Shathakam no name has been made of Kabir.

THE KEERTHANAS OF RAMADAS:

Bhaktha Ramadas an ardent devotee of Lord Rama was a Saint – Composer, musician and great philosopher, he was a scholar in Telugu and Urdu. He was well-versed in Sanskrit also is evident from his compositions.

The language adopted by Ramadas in his songs is simple. In many of his Keerthanas some of Urdu and Persian words were freely used. These Keerthanas mostly sing by the Karnatic Music form. In his popular song

“Ikshvakukula Tilaka Ikanaina palukava Ramachandra.............” Ramadasu put forth before the Lord the details of the expenditure incurred by him for the word. Several ornaments and jewels were referred to in it “Chintaku Patakamu” is a necklace presented to Sita by Ramadas. The necklace contains golden leaves resembling tamarind leaves. A story is said about the special liking shown by Sita to tamarind leaves.

There is a story behind it in Satyayuga. There was a young widow who turned out be a prostitute. She brought up a parrot and taught her to utter the words Rama – Rama. One day the lady and bird both were died. Yama arrived also the Vishnu escorts also came both are sought to take into their courts a dispute arose between them. She spent immoral life so she must produced before Yamadarmaraja No. She uttered Ramanaama several times not only that she taught it to a bird also her place is in our Vishnuloka. At last Yama declared who recites Vishnunaama the Yama sent to Vishnuloka.
In a lonely song sung by him

How many more births are in store for me. How can be I bear all these my lord. He is not proper on your part to ignore me like this. He finally prays to Rama “I am your servant. I surrender to you”. The prayer in Choornika is a composition deserving special mention.

It is an elegant prayer address to Sri Ramabhadra of Bhadrachalam. The 24 conspicuous names of Bhagwan Srimannarayana are referred to in it. This keerthana contains a resume of the Ramayana.

A few songs of Ramadas are very popular among them.

Deenadayalo Paripurna Krupalo Bhakthavatsala he parama Dayalo – O Rama you are the protector of those who are helpless and giving full blessings”.

Idigo Bhadradri Gauthami Adigo Chudandi – “This is Bhadrachalam, that is Gowthami (Godavari) river and the Lord Rama with his wife and brother resided temple.

Ramachandraya Janaka Rajasa Manoharaya A Mangalaharathi (Closing of Pooja or Bhan) is a popular one in all over the Telugu country. All Lord Rama temples and Lord Hanuman temples recite every day even today.

In addition to the songs in Telugu, Ramadas composed over a hundred verses in Telugu called “Dhashardhi Shathakam” each of the verses end with the refrain “Dhaashrathree Karunapayonidhi. “Dhashrathee” means ....... King Dhasharadha Son Rama. “Karunapayonidhi” means ....... Ocean of compassion. Telugu people are familiar with these verses. Most of the children in elementary schools of Telangana and Andhra Pradesh can recite at least five verses of “Dasarathi Shathakam”.

This book is a master piece in Telugu literature dealing with devotion, morals, philosophy and introspection.

Bhakta Ramadas gained a noteworthy place in the tradition of the galaxy of “Rama-Bhaktas”. His songs on Lord Rama spread all over the country by modern electronic instruments. His life, his sufferings and his obtaining in the end the blessing of Rama became a common story among the Telugu people.