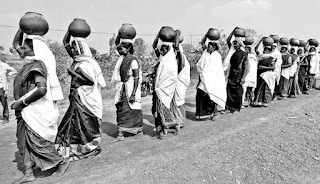 It is the second biggest tribal carnival and celebrated by Mesaram clan of Gond tribes for 10 days.

Tribal people from Maharashtra, Chhattisgarh, Orissa and Madhya Pradesh belonging to the Mesram clan offer prayers at the festival.


The Nagoba Jatara starts in pushya masam in every year according to English to the English months December to January.

The adivasi Gond and Pardhans of Mesram clan come to Keslapur for the annual pilgrimage, Nagoba jatara, which will begin after a ritualistic puja at the Nagoba temple in Adilabad.

Thousands of aboriginal people come here from Maharashtra, Madhya Pradesh, Chhattisgarh and different parts of the district to participate in the week-long event that showcases the high points of the adivasi culture still alive in these parts of the country.

The pilgrims who arrive in bullock carts even from far off places are camping under the holy banyan tree and will together move into the temple premises on Sunday to perform various religious activities over the next five days. Women will participate mainly in the rituals associated with invoking of the serpent god which is the Mesrams’ clan god.

They will fetch water in sacred pots from an old well near the village and mix it with the sacred water from Godavari and purify the sanctum sanctorum of Nagoba temple. The puja will be performed at about 11 p.m. followed by one of the most interesting rituals called ‘Bheting’.

This is a ritualistic introduction of the new brides in the clan during the previous year by way of marriage. The white clad brides are brought to the temple in a solemn procession to be introduced to Nagoba which will render them eligible to pray to the clan god.

The Gonds also perform ‘Toom’, in remembrance of the departed people in the clan. This year, abut 70 ‘Tooms’ will be performed, means 70 persons of Mesram clan died during the last 12 months since the last jatara.

On the third day of the jatara, the tribal darbar will be held wherein all the arms of the administration are made available to look into the grievances of the Adivasis. The trend was started in 1946 by famous Austrian Anthropologist Christopher von Furer-Haimendorf in an effort to strengthen the Gond panchayat system of which the Mokashi or Raja was at the head.

The Betal puja and Mandagajiling are the two events scheduled for the last day of the jatara. These are meant to recall the Gonds’ antecedents as warriors and to bid adieu to them.