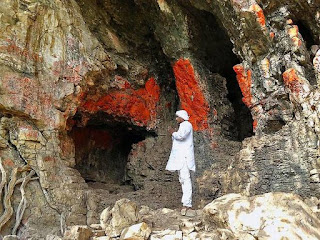 The sparsely populated hilly confines of Kota-Parandoli gram panchayat on the Telangana-Maharashtra border in Kerameri mandal of Kumram Bheem Asifabad district will come alive on December 31 when the sacred month-long Jangubai pilgrimage of Adivasis gets underway. Thousands of aboriginal Gonds, Kolams and Pardhans of Adilabad and neighbouring districts will visit the ancient cave temple of the most revered Goddess Jangubai situated in picturesque locale of a hillock by the side of a hill stream.

Despite the onslaught of modern times, nothing much has changed in these parts and one gets a feeling of being transported back in time when approaching the sacred cave.


The ethnic people coming here still follow their ancient customs and traditions which involves reaching the temple in bullock cart caravans, the able bodied walking bare feet, for one.

“This is the time for bhet balai of meeting of the Jangubai deities in respective villages and the Goddess residing in the cave temple. Coming in caravans, devotees from a given village bring the deity here, give it a ganga snan or bathe it in the ‘Topla Kasa’ spot in the local hill stream before taking it to meet the real Jangubai in the cave temple,” disclosed Marapa Baji Rao, chairman of Jangubai Devasthan Welfare Committee, on the most important part of the event.

Among the other important rituals observed at the temple is the offerings made by devotees who had their wishes fulfilled. “The devotees would have sought the blessings of the Goddess in recovery of their sick family members or in finding a solution to some problem,” Baji Rao pointed out.

Legend has it that Jangubai created the sarpe saga or eight new clans of Gonds -- the Tumram, Kodapa, Raisidam, Salam, Vetti, Here Kumre, Marapa and Mandadi. Not only these but scores of other clans of Gonds, Kolams and Pardhans worship the goddess who is known as Raitar Jango, or Sadar Pen or Chief Goddess.

As per given the given custom, villagers in a given habitation get to decide the date of their pilgrimage. They set out together in bullock cart caravans making one or two night halts en route depending upon the distance to be covered.

A caravan can even take a whole week for the two-way journey through the jungles and vast degraded forest areas. For those intending to reach the spot on motor vehicles from this side of the inter-State border, the road from Lokari in Narnoor mandal of Adilabad district to Maharajguda and to the cave temple is the only motorable route.