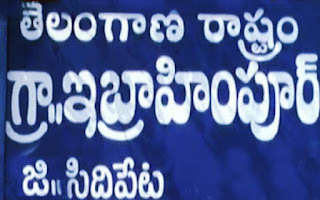 Ibrahimpur village located in Siddipet Mandal and District transformed into a model village for sustainable development. It all started with a genuine endeavour by the villagers to transform their village as a model village.

From becoming outside defecation-free to implementing clean and green initiatives and continuing with their collective spirit, the villagers have now attained such a high point where not only Telangana, but entire India is taking inspiration from Ibrahimpur today.


The village was declared the first village to go cashless in South India and the second in the country to do so, the story of development in Ibrahimpur only keeps getting better.

The village with a 1,200 population has been declared a 'cashless transactions village' after the district administration opened accounts for all villagers who did not have them, gave them debits cards, set up swipe machines in shops and micro ATMs in ration shops.

Village sarpanch Kumbala Yella Reddy said all residents of the village contributed in making in a 'cashless village'.

For the first time in the State, a village – Ibrahimpur – in Siddipet manual and District has become ‘mosquito-free’.

Construction of ‘soak pits’ (water harvesting) in the village has resulted in achieving this unique milestone, a process that took about three months.

All the 265 households in the village got the soak pits constructed. By this method, not even a single drop of water comes out of the house onto the road.

Disclosing these details at a press conference here on Saturday, Collector D. Ronald Rose said that the ‘magic pits’ model would be implemented across the State under the National Rural Employment Guarantee Scheme (NREGS).


Interestingly, Ibrahimpur village has a distinction of having 100 per cent water harvesting facilities and toilets in every house.

It also planted a staggering two lakh saplings during the Haritha Haram programme.


It is also a perfect model for the clean ways it follows. No garbage strewn around, not even the ubiquitous plastic cover and pet bottle is seen. The village boasts of clean lanes and good sanitary practises. The roads here are cleaned thrice a day and this is being done for the past two years. The village has not reported any viral fever cases for the past several months and the credit goes to the sanitation drive that has become a regular practice now . And it is not surprising to note that four Registered Medical Practitioners (RMP) out of five who worked in the village left for other places in search of patients for the simple reason that not a single viral fever case was reported here. No dirty water is seen flowing on the lanes and bylanes as this water is channelized to plants and trees.

Every house has a ‘water conservation pit (Inkudu gunta)’. Such development is possible with the active involvement of a resident K. Yella Reddy who is the son of Sarpanch K. Lakshmi Yadamma and is an automobile engineering diploma holder from the Jawaharlal Nehru Technological University.

Once upon a time, water from a hand pump and overhead tank used to stagnate at the entrance to the village. Now it is not possible to even find a drop because they flow into the water pits (also called soap water pits. Of the 265 houses, 244 have such pits, apart from six more in public places. The pits are constructed in four feet by four and six feet deep. A cement water container with outlet on the top is fixed in the pit after filling it with 60 millimetre gravel for two feet in the bottom and the sides. Later 40 mm gravel is used to fill the pit, into which the used water is channelised through plastic pipes fixed at the outlets. The result is extraordinary. We made our village a model in constructing water pits. We are able to grow saplings where we constructed those pits ,” says Mr. Yella Reddy.