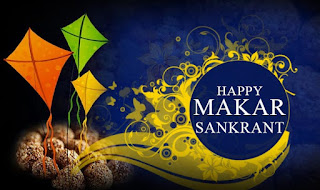 Sankranti means transmigration of the Sun from one Rashi (constellation of the zodiac in Indian astronomy) to the next. Hence, there are 12 Sankrantis in a year.

Why is it called Makar Sankranti?
On Makar Sankranti, the sun enters the sun-sign of Capricorn or Makara (the Indian rashi). Therefore the 'Makar' in the name. Thus, the name of the festival literally means the movement of the sun into Capricorn.

Makar Sankranti Festival is observed every year in the month of January falls on 14th or 15th .

Most Hindu festivals follow the position of the moon and are based on the lunar calendar. Thus, the dates of festivals change every year. But Makar Sankranti is a festival which falls on the same day every year as it follows the solar calendar.

However, once every eighty years, due to revolution, the day is postponed by one day. Makar Sankranti is celebrated on the 14th of January every year (sometimes on the 15th) for now.

From 2050, it is predicted that the festival will fall on the 15th January (and occasionally on the 16th).

Tilgul
Makar Sankranti is the festival of til-gul where sesame and jaggery laddoos or chikkis are distributed among all. They are generally accompanied by the saying, "Til-gul ghya ani gud gud bola", which translates to 'eat these sesame seeds and jaggery and speak sweet words'. The festival is one of bonding where every member of society is asked to bury the hatchet with enemies and foes and live in peace. Also, it is a superstition that during the festival, the Sun God forgets his anger on his son Shani and visits him. Thus, by distributing sweets, everyone is asked to spread joy around. Also, since the festival falls in winter, eating of sesame and jaggery is considered beneficial to health as they are warm foods. Thus, it is specifically this sweet that's distributed as it signifies bonding and good health.

In the early hours of sankranti festival “Haridas” the servant of lord Vishnu is seen by singing songs he visits every house and offer blessings.

Kite Flying
On this occasion every city and town seen with the flying-kites and sky seems to be color full, the craziest part is they enjoy by cutting neighbor’s kites, funny right?
There is a very interesting reason behind the kite-flying. Kite-flying in olden days was generally done in the early hours of the morning, when the sun's rays were bright but not too harsh. Also, during kite-flying, the human body was exposed to the sun for long hours. The early morning sun is considered beneficial for the skin and body. Since winter is also the time of a lot of infections and sickness, by basking in the sun, Hindus believed that the bad bacteria on their bodies would be cleared to a certain extent. Creating a fun way of sun basking where no one would even realise they were reaping benefits was through kite flying. Cool, right?

It is a 4 days long festival by claiming its own significance's of each day and the days are classified as:

Day 1 – BHOGI
The preceding day of sankranti is bhogi , on this day people discard the old things as it is a transition into new period . At the dawn, people lit a fire with the solid fuels and wooden furniture that is no longer in use, the sign of this act is sacrifices all the old habits, beliefs and attachments in the presence of god of fire.
In Hindus family the children usually less than 3 years old are showered with Indian fruit “Regi Pandlu “ in Telugu in order to protect the children from evil eye .
Landlords offer gifts to the workers in the form of clothes; money food and sweets are distributed to every one to spread sweet of happiness.

Day 2 – MAKAR SANKRANTI
During this day everyone wakes in the early morning and starts with their holy bath and wear new cloths and perform traditional offerings to ancestors and pray god.the women decorates the house as well as ground (entrance of house) by drawing beautiful patterns (muggu) on the ground “rangoli” in telugu and it is decorated with flowers and a hand pressed piles of cow dung called “gobbemma”.
On this day everyone in the family are reunion to share their happiness with all the members in family especially siblings.

Day 3 – KANUMA
The day after makar sankranti is kanuma this day is specially associated with farmers on this day every farmer pray and showcase their cattle with honour .The women in the family feeds the cattle to share love and affection towards animals .in general this is a Thank giving day to cattle.

Day 4 - MUKKANUMA
Finally , the last day of sankranti is mukkanuma and farmers offer prayers to soil, rain and fire for helping them to harvest and some even offer gifts to goddess ( probably this will be animals).
The celebration of this day is mostly seen in coastal Andhra where all the members of family reunion to have have some fun filled activities, these activities mostly include cock fighting (kodi pandalu ) , bullock/Ox racing , kite flying .