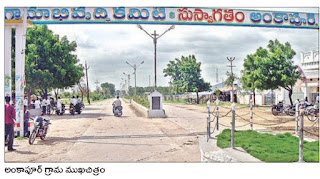 Ankapur is a village in Armor Mandal, Nizamabad district of the Indian state of Telangana. This village is considered as one of the Model Villages in the country. It is recognized as a Model Village by the ICAR, ICRISAT and the International Rice Research Institute.

A small, self-sufficient and agriculturally rich village, Ankapur is a model for all villages in Telangana.


Almost every farmer in Ankapur village has taken to micro-irrigation using drip system.

Farmers in Ankapur village reap four crops in a year, which generally takes their counterparts by surprise

Unity in the farming community and commitment to work are instrumental in aiding the success of farmers in this model village in Armoor mandal, which has made headlines several times.

Acute drought prevailing across the district appears to have little impact on this agriculturally rich and model village which is hogging the limelight as the Seed Bowl of Telangana.

Drought conditions have little bearing on normal life here, even as crop failure and migration of agricultural labour have been reported in neighbouring villages, adversely impacting their economy.

The village is better off compared to others as far as drinking water supply is concerned. The pipeline from Gutpa lift scheme on the right bank of the Godavari, laid last year, is taking care of drinking water needs. That apart, farmers here do not feel any negative impact on fodder for cattle as it has very little livestock.

“Ankapur has a population of over 6,000 people. For several decades now we do not rear cattle more than the requirement. Consequently, our milch animal population is less. We know the importance of water and therefore use minimum amount of water to get maximum quantity of crops. Since we raise only irrigated dry crops including turmeric, jowar, maize, bajra and vegetables, whatever fodder we get is enough for our animals”, explains Tota Gangaram, a former government employee, and an active member of the Village Development Committee.

There is absolutely no problem of migration of workers and sending cattle to slaughter houses, phenomena that are common during drought.

The same water is used to water the crops and also quench the thirst of cattle. The National Rural Employment Guarantee scheme has come as a boon, specially to small and marginal farmers who also go to work in the lean summer season. “Those who have water have raised turmeric crop in 40 per cent of their land and those who don’t have planted vegetables, but 80 per cent of the land remained fallow”, deplores, K.K. Bajana, secretary of the local farmers’ association.

This village in Armoor mandal, situated 20 km away from the district headquarters, on Nizamabad-Armoor road boasts of three commercial bank branches, 300 tractors and an equal number of cars.

It also has the credit of being a village sans huts at all, so much so, driving through the main road, one almost feels he/she is entering a big town.

Farmers here are famous for having adopted modern farming methods in cultivating commercial crops like turmeric, maize and vegetables on a large scale. They cultivate commercial crops, as opposed to traditional ones like paddy, in a district now known to be the rice bowl of Telangana.

Farmers are well aware of how to adopt modern methods to augment their output amid scanty rainfall, and they therefore never look at governments for succour even in the worst of scenarios. Hence, more than 75 per cent farmers who took crop and other agriculture loans have already repaid the banks without seeking a waiver.

The village has earned recognition from national and international agricultural research bodies such as the ICAR, ICRISAT and the International Rice Research Institute. This, probably, is only the village in Telangana that has a separate web portal created by its NRIs.

“We have over 500 educated youth either working or pursuing higher studies in the USA, the UK, the UAE and other countries. The village has sound financial strength with the money sent by them, besides agricultural income,” says Challa Ananta Reddy, chairman of Village Development Committee.

Women work hard here and even though no household owns more than 10 acres of land, they produce a maximum output. During one bumper harvest, farmers were said to have purchased so many new cars with the remuneration from crops.

It is no exaggeration if one says that the village has no thatched houses and huts. Inhabited by 5,689 people (as per 2011 Census), the village has 1,520 households and over 2,000 acres of cultivable land. This could be one among a few villages which has a less number of white ration cards, according to Village Revenue Officer Mohan.

The VDC plays a pivotal role for the discipline and development of the village, says M.C. Ganga Reddy, president of the Rythu Sangham.