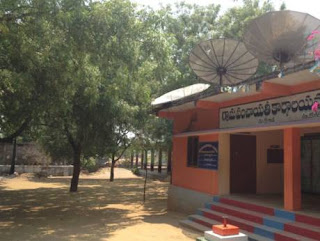 To develop a Model Village local officials have been asked to motivate the villagers to undertake development on several points
As part of the plan, three villages Gangadevipalli in Telangana, Punsari in Gujarat and Hiware Bazar in Maharashtra were declared model villages. Gangadevipalli was selected for its practice of organising villagers into committees for the betterment of the village.

The Hiware Bazar village, on the other hand, is known for its irrigation network and water conservation model. The model of free labour, ban on liquor, grazing and felling of trees and adoption of family planning methods in the village

Gangadevipalli, with a population of 1,352, is not new to such recognition.

The village has over two dozen committees, which manage areas like health and hygiene, the provision of drinking water, cable television and literacy.

The village has enforced an alcohol ban for 25 years, has 100 per cent literacy and has a toilet in every house.

Another remarkable achievement for the village is that its married population under the age of 35 does not have more than two children.

100 per cent Life Insurance cover for every family, immunisation, zero child mortality, 100 per cent repayment of agricultural loans, compulsory membership to self-help groups for women, and mandatory participation of every household in the process of development through committees.

The village now boasts 100 per cent survival of new-born babies, their inoculation and immunization, as well as regular vaccination of children below five. The supply of nutritious food to children and pregnant and lactating women, along with regular health check-ups, is also among the unique achievements of the village.

The gender ratio of women and men is almost the same. Each woman is also a member of a self-help group, making a significant contribution to the family income.

In 1993, as Gangadevipalli was getting noticed, Bala Vikasa, an NGO, walked in with a proposal. The village had severe water scarcity and the NGO offered to build two water tanks. The only condition was that the villagers would have to bear 15 per cent of the cost, which was Rs52,500. Sarpanch Koosam Rajamouli, then a youth leader, called a meeting and placed the proposal before the people. But, they were suspicious. When the government was not helping, why should a private organistaion do so? Rajamouli, however, did not give up. “Be it the water tanks, toilets in every home or the bare necessities, we believed in unity,” he says. “It was not easy to bring everyone together, but we did not give up. When they saw the results of working together and recognised the need for development, the critics, too, started joining us.”

Once the tanks were built and people started getting tap water in their houses, the doubting Thomases wanted to join. Rajamouli said yes, but added a condition. The original price for a water connection was Rs1,000 but, as a fine, they would have to pay Rs1,500 and the next lot would have to pay Rs2,000.

Says Singareddy Shoury Reddy, executive director of Bala Vikasa: “We stressed the need for asset-based community development. We motivated everyone to contribute in the development works and this became the root of the achievements of this village.”

Rajamouli soon formed 25 committees for water, health, street lights, etc. The members change every two years and new members are elected by a voice vote. Each committee has ten members, and each member looks after the requirements of ten families.

“The committees have given a sense of responsibility to the villagers,” says Rajamouli. “Every committee has women on the team except for the street lighting committee, which involves late nights and pole-climbing. We did not want to do it for any award. We did it because we wanted to be a model village.”

The residents’ innovative rural governance completely changed the lifestyle of the villagers in the past two decades. From setting up toilets in their homes to equipping the whole village with water supply, the village stands as an inspiration in implementing such development works.

“Be it the water plant, toilets in every home or the bare necessities of life, we believed in unity,” said Mr Kusam Rajamouli, president of the village development committee. “It was not easy at first to bring everyone together. People were divided along caste, religious and political lines, but we did not give up. Once they realised the results of working together and after recognising the need for development, gradually those who did not believe in us too started joining us .”

Social service organisation Bala Vikasa has been working closely with the village and played a major role in motivating the people to build their own life. Executive director of Bala Vikasa, Singareddy Shoury Reddy said, “We stressed on the need for asset based community development to develop the village. We motivated everyone to contribute in the development works and this became the root for the achievements of this village.”

The village became famous when, for two terms between 1995 to 2006, it was run by an all-woman panchayat. Even the men say there was a certain calmness when the women were at the helm.

In 1995, impressed by the civic sense of its people, the government upgraded it to a special panchayat.

It was also adjudged India's best panchayat in 2007 by the Union government.

At the launch of the Grama Jyothy programme, the Chief Minister said, “Gangadevipalli is an example of what the unity of the people can achieve”. Declaring his support for the village, Rao announced a Rs100 million (Dh5.6 million) grant for various development programmes in the village including a 100 KV power plant and a residential school.

For the few families who don’t own a home in the village, the Chief Minister announced a two-bedroom house. He also set a goal for the village: Gangadvipalli aims to become a mosquito-free area.

The village has achieved so much that the State government has included a lesson on Gangadevipalli village in Social Studies in 6th standard. The village has bagged several national awards, attracted representatives from various states within India and from other countries. Gangadevipalli village is now setting new benchmarks in community development and inspiring people from all walks of life. The visionary, committed, selfless and effective leadership has transformed a normal backward village into a model village in terms of cent per cent development and self-reliance.