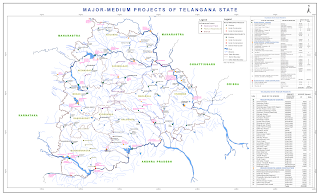 
Sriram Sagar Stage - I (Pochampad) Major Irrigation Project  constructed near Pochampadu, Nizamabad district to irrigate 1 million acres (4,000 km2) to utilize 140 tmc water. As a result of Inter-State accord on sharing of Godavari River water, the allocation for this project was increased from 66 TMC to more than 200 TMC. Accordingly, the scope of Stage-I of the Project was enlarged by extending Kakatiya Canal upto Km.284.00, excavating Saraswathi Canal (Km.0.00 to Km.47.00) and Laxmi Canal (Km.0.00 to 3.50).  It also provides drinking water to urban & rural areas along the canal system, particularly Karimnagar and Warangal towns. It also meets the water demands of National Thermal Power Corporation at Ramagundam. In addition to the above, 4 Units of 9 M.W. each to generate 36 M.W. have also been set up on the right side in the non-overflow portion of the Masonry Dam at Sriramsagar Reservoir.

Sitarama Major Lift Irrigation Project proposed  redesigned dummugudem project in Rollapadu, Tekkulapalli Mandal, Bhadradri Kothagudem District. The Sitarama project, which is estimated to cost Rs. 7,000 crore, will bring the entire cultivable land in the district to an extent of over five lakh acres under the irrigation cover.

Sriram Sagar Stage - II Major Irrigation Project
This Project is an extension of Kakatiya Canal from Km 284 to 347 and Saraswathi Canal from Km 77 to 144 with modernization of Kadam canal from Km 0.00 to Km 77.00 to benefit total ayacut of 5,87,000 acres. Under Kakatiya Canal an ayacut of 64,023 acres in Bhadradri Kothagudem District will be benefited

Sadarmat anicut
The anicut was constructed across one branch of the mighty Godavari which splits at the place, by Irrigation Engineer J.J. Ottley in 1891-92 when Khanapur had its first Taluqdar in C.E. Wilkinson and Nawab Ikbal-ud-Dowla, who went by the title of Vicar-ul-Umra Bahadoor, was the Prime Minister of Hyderabad. It currently irrigates over 6,000 acres through its nearly 13 km long Khanapur left flank canal and 800 acres through the 3 km long Badankurti right flank canal in Nirmal District

Kaddam Narayana Reddy Project is a Major Reservoir across river Kadem, a tributary river of Godavari near Kaddam Mandal, Nirmal District, Telangana to irrigate 61776 acres in Nirmal and Mancherial Districts.

The project is designed to utilise about 63 tmc of water at a cost of Rs. 900 crores in the first phase. In the second phase, about 49.5 tmc would be lifted to the upland regions of Peddapalli, Nirmal, Nizamabad, Warangal and Medak districts. 6 tmc water allotted for NTPC ramagundam project. After the flood gates are installed, the project could would store about 20 Tmcft of water.

The project operational requirement is 163 MW power and 469 million KWh of electrical energy annually to pump the water. The project would supply water for NTPC power project reservoir in Ramagundam mandal in Karimnagar.  It is started in 2005 near Mormoor and Yellampalli village and supplying drinking water to Hyderabad city .

Kaleshwaram project is the redesigned Pranahita-Chevella project, which would have three barrages at Medigadda, Annaram and Sundilla and reservoirs at another 18 places. The three barrages would have a storage capacity of over 28 tmc ft together and the reservoirs would have another 157 tmc ft. However, the government was seriously considering reducing the capacity of Komaravelli Mallannasagar at Tadkapally from the proposed 50 tmc ft to about 20 tmc ft. The Kaleshwaram project requires 4,500 MW power for lifting water in different stages including, 113 meters till Yellampally reservoir. From Yellampally, it would be lifted to Mid Manair and from there to Anantagiri, Imambad and Mallannasagar reservoirs. From Mallannasagar, the water would flow through gravity to Upper Manair and reservoirs in Nizamabad and Adilabad districts. It has been proposed to divide the work into 28 packages in six links, including five packages for the first three barrages.


P.V.Narasimha Rao Kanthanpalli Sujala Sravanthi Project on Godavari River by construction of a barrage at Kanthanapally (V), Eturunagaram (M), Jayashankar Bhupalpally District and diverting water through tunnels and lifts. A total of 50 TMC of water out of 429.06 TMC water available at Barrage site in the river Godavari is proposed to be diverted in Phase-I and is utilized for stabilization of 7,50, 000 Acres of ayacut under Sriram Sagar Project Stage-I & II in Warangal, Khammam and Nalgonda Districts.

Nagarjuna Sagar Project is a Major Irrigation Project commenced in the year 1955 and the Dam was completed in the year 1969 enabling partial storage  located near Nandikonda village of Peddavoora Mandal in Nalgonda District to irrigate 2,212,287 acres to generate power to an extent of 960 M.W. The left canal command of 4,19,816 ha. (1,037,387 acres) in Nalgonda, Khammam and Krishna Districts.

Palamuru Rangareddy Lift Irrigation project is a Major Irrigation Project at Karvena village of Bhoothpur, Mahabubnagar district is approved by government and taken up with an estimated cost of Rs.35,250 crore and seeks to irrigate about 10 lakh acres in Mahabubnagar, Ranga Reddy and Nalgonda districts besides providing water for drinking and industrial needs in and around Hyderabad.

The first phase of Palamur lift irrigation scheme will be taken up through lifting of 70 tmc waters from Jurala project to Koil Konda in Mahabubnagar district to irrigate 7 lakh acres in Mahbubnagar, 2.75 lakh acres in Rangareddy and 30,000 acres in Nalgonda district.