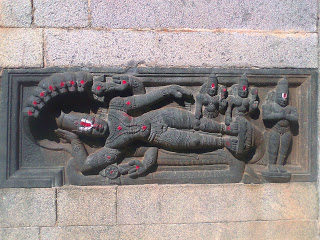 Srirangapuram temple situated at an island formed by 'Ratna Pushkarini' lake and is renowned for the Sri Ranganathaswamy temple.

Later, Ranganayaka (Lord Vishnu) appeared in his dream and told the king that his idol is lying in the kingdom and an eagle would direct him to that place. And it is said that succeeding day Krishna Devaraya followed the eagle and found the idol between Kothakota and Kanvyapalli mountains. The temple was constructed near Ratna Pushpakarni Lake in the kingdom. 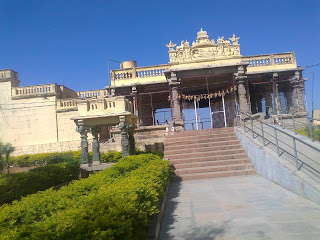 Tall and huge Gopurams and numerous mandapas make this temple architecturally attractive. The temple was built by the Rajas of Wanaparthy Samsthanam in 18 A.D. The temple is surrounded by lush greens and beautiful sacred water flow behind the temple.
The Ranganayaka Swamy temple was built around the 18th century A.D. The classical Vijayanagara Architecture is perfectly reflected in the construction of this temple.

According to some legend, the great vijayanagar ruler Sri Krishnadevaraya visited the famous Sri Ranganayakaswamy temple located and Srirangam and desired to built a similar temple in his kingdom.


Later,in krishnadevaraya dream, Lord Vishnu said that his is located at a certain place in his own kingdom and will be shown to you by an eagle.

So, the next day the king followed the eagle and found the Lord Vishnu idol between Karapakala hills and Kothakota. He constructed this beautiful Ranganayaka Swamy temple close to the Ratna Pushkarini Lake.