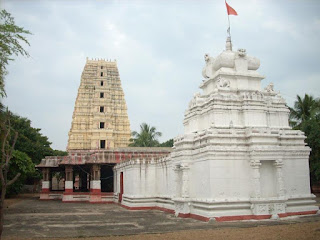 Jatprole or Jataprolu in Kollapur Mandal, Nagarkurnool District is popular for two temples known as Madana Gopala Swamy Temple and a group of Shiva temples including the famous Agasthyeswara Swamy.

The temples were moved to Jetprole from the villages of Malleswaram and Manchalakota during the construction of Srisailam.

Lord Sri Krishna who is one of the Ten Incarnations of Lord Vishnu is known as Madana Gopala when he is represented with Rukmini and Satyabhama or otherwise he is known as Venu Gopala Swamy.

The temple possesses a huge gopuram with large wooden gates followed by spacious Sabhamandapa, antarala and the sanctum. The pillars in the Sabhamandapa are beautifully carved in Vijayanagara style.

The temple has entrances on four sides and there are several sub-shrines within the temple complex.

Jataprole is a small village in the Amanaganti Seema. It was mentioned in a stone inscription during 12th Century A.D. by Malla Naidu who is the son of Recharla Bethi Reddy and Eurka Sanamma who made it a capital of Paragana and wrote it to Kamineni Gopaiah. Vijayanagara Kings gave it to Surabhi Kings during 16th Century. Madhavarayalu of Vijayanagar King constructed Mantapas and Gopuras to the Jataprole and Manchala Katta temples.

As per the History of Mahabubnagar by B.N. Sastry "Mallanaidu (Kumara Madanaidu) from the 14th Generation of Jataprole Sansthan received it from Anegondi Ramarayalu in 1527 A.D as remuneration and ruled it for some time. He built Madanagopala Swamy temple at Jataprole and started Brahmotsavam and it has 400 years of Glorious history. This temple has beautiful stone sculptures and it was shifted from its original place on 15 th February, 1989 and re-constructed it on the banks of KrishnaRiver. Beautiful sculptures could be spot on the top of Gopuram of the temple complex.

All the Shiva temples were shifted from nearby villages and were originally built during 10th century.  Some of these temples consist wonderfully built mandapas, pillars and gopurams.

"Thirumangayalvaru Charitha" a Yakshagana on Lord Sri Venkateswara was written by Kotharu Bhavanacharyalu along with Thirunagari Narasimhaiah. Nine Days Brahmotsavam Festival will be held for Sri Venkateswara Swamy at DevuniThirmalapurVillage and it will be held in the Telugu Month of Maghamasa for Fifteen Days. This festival attracts thousands of Pilgrims from the surrounding villages with sweet shops etc.

Agasthyeswara Swamy Temple
Agasthyeswara Swamy temple built between the 10 th & 16th century A.D. Festivals like Sivarathri, Kartiha Pournami, Masa Sivarathri and Toli Ekadasi are celebrated with great fervour. This temple was shifted to Jetprole when the Krishna waters threatened to submerge the villages after the construction of the Srisailam dam. Another temple 15 km from Kollapur, is the Madana Gopala Swamy temple built by the Rajas of Jetprole during the 16th century A.D. The pillars, beams and the walls of the temple are richly adorned with beautiful sculptures.

Temple Timings :
6:00 am to 8:30 pm
How to Reach
Road: Visitors can reach the destination from Pebber (NH-7) or Kollapur. The temple is located about 36 km from Pebber (NH-7); about 16 km from Kollapur, 158 km from Mahabubnagar and about 85 km from Kurnool.

Rail: The nearest railway station is located at Gadwal, which is about 50 km away from the destination.

Air: The nearest Airport is located at ShamshabadInternationalAirport (Hyderabad).